This chart shows how artificially lowering prices lead to shortages.
× 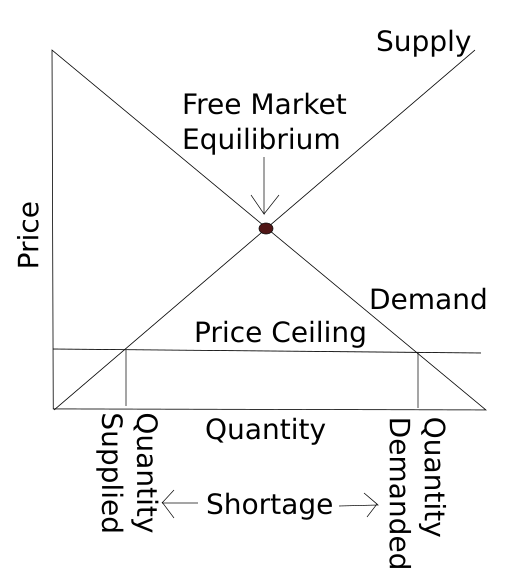 In previous posts I have mentioned that Venezuela is in an untenable economic situation headed for collapse, but I haven't expanded much on this topic. In the next couple posts I will take a look at the current state of Venezuela's economy and how things got so bad.

Venezuela's exports are collapsing, inflation is soaring, it has been in recession since 2014, there are rolling blackouts and its citizens lack access to basic necessities. Venezuela's citizens are smuggling basic goods like toilet paper and medicine into the country from Colombia. However, just a few years ago many of those same necessities were being smuggled out of Venezuela and into Colombia. Angry mobs of protesters are looting trucks and food warehouses. This quote from an anonymous Venezuela mother sums up the desperation of the looters, “If you have a son who says, 'Mommy I want my bottle,' and you don't have milk to give him, in a moment like that you don't think of anything else and you grab everything you can for your family." So how did things get to be so bad in Venezuela in just a few years time?

In 2003, former President Hugo Chavez established price controls on 400 basic goods. The idea was that if producers of these goods were forced to sell at low fixed prices it would benefit lower income Venezuelans. Over the next four years, inflation soared 78% and shortages of these goods became commonplace. Smuggling also became a lucrative business for Venezuelans who could buy these goods at artificially low prices in Venezuela and profit by selling them in neighboring Colombia. In 2009, Chavez expanded price controls to include 12 more basic foods including Coffee, Rice, cooking oil, sugar, milk, cheese, and tomato sauce. When rice processing companies complained that the price controls would bankrupt them, Chavez sent the military to enforce the controls.

As time went on, shortages increased and inflation rose as any econ 101 student would have predicted (see figure 1 for an explanation). During the presidency of Hugo Chavez, oil experienced a major bull market and high oil prices meant that oil rich Venezuela could fund extravagant social programs. However, just after the passing of Chavez, as oil prices crashed and Venezuela's economy took a turn for the worse. The new President, Nicolás Maduro, faced a major drop in revenue. After oil prices fell, shortages became more and more common. Things like toilet paper became difficult to find unless one turned to the thriving black market.

Smugglers who had previously smuggled cheap Venezuelan goods to Colombia have now become a crucial lifeline for starving Venezuelans. The smugglers simply changed the direction that they smuggle, now goods are smuggled into Venezuela and sold on the black market.

Venezuela's problems are almost entirely self-inflicted. When Chavez was in power, he ran many companies out of business and did not allow Venezuela's economy to diversify away from oil. Social programs were taken to the limits of their budget and the government did not have a buffer of savings that they could fall back on in the event of a drop in oil prices. Chavez and Maduro have both fallen back on the age old strategy of blaming the United States, Colombia and domestic political opponents for all of Venezuela's problems. After Chavez died from a heart attack brought on from his battle with cancer, Maduro immediately blamed the United States, “There's no doubt that Commandante Chavez's health came under attack by the enemy...The old enemies of our fatherland looked for a way to harm his health.” The Venezuelan public has now reached the point where they are no longer inclined to believe the blame game played by Maduro. Almost 70% of Venezuelans are now calling for the removal of Maduro this year. Maduro has been defiant, but social unrest has been increasing.

Next week I will examine some of the specific problems facing Venezuela such as their lack of energy diversification and their defiant stance toward private enterprise.

This chart shows how artificially lowering prices lead to shortages.