This chart shows the price of light sweet crude oil for December Delivery.
× 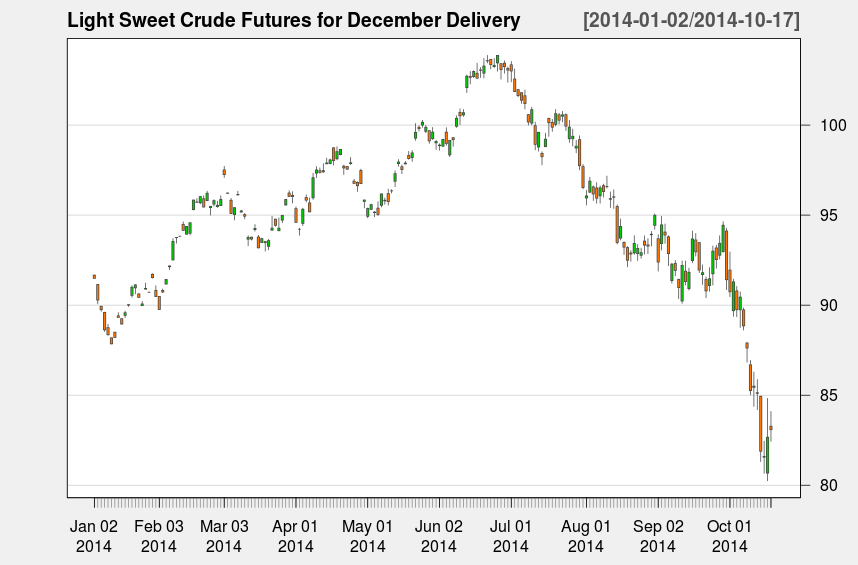 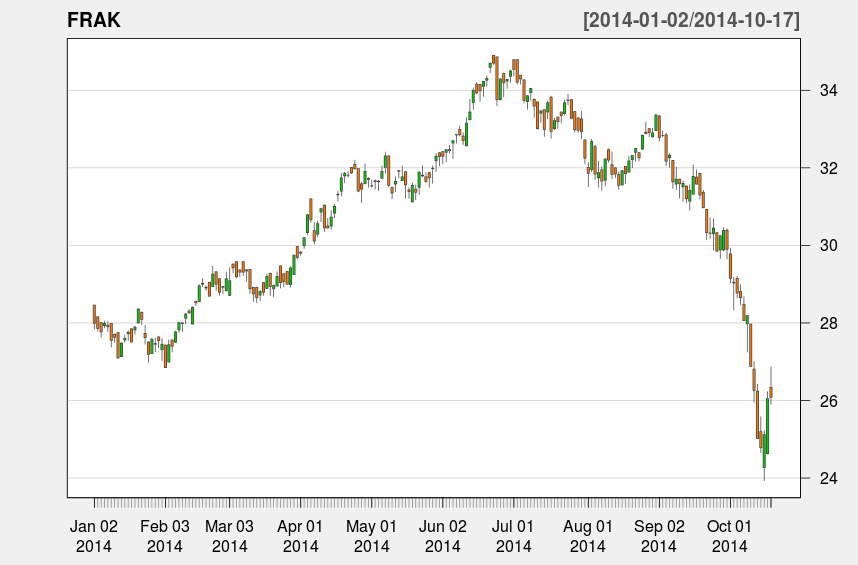 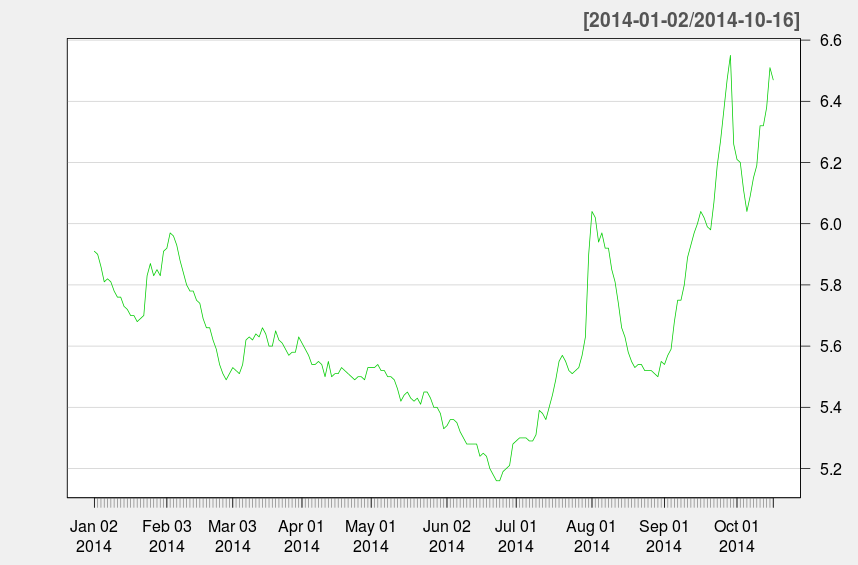 The Risky Business of Oil Production

Last week the S&P 500 moved lower, but was able to recover much of its losses after renewed speculation that the Fed may extend the quantitative easing program. The speculation was triggered after James Bullard, the president of the St. Louis Federal Reserve Bank suggested that the Fed should continue quantitative easing at a low level for a longer period of time. Although Bullard is not a voting member at the moment, his comments were enough to set off a surge in stock prices at the end of the week. In a change from previous weeks, the Russell 2000 index which tracks smaller companies, outperformed the S&P 500 and ended the week in the green. One of the hardest hit areas has been oil and gas industries, which can be attributed to the much lower price of oil. The first chart on the right shows how quickly the price of oil has fallen, while the following chart shows the impact on oil producers. While most individuals and businesses will welcome lower oil and gas prices; lower oil prices could mean trouble for others.

I have discussed the energy revolution that has occurred in the United States in previous newsletters. I discussed how new technologies in the last several years have helped oil drilling companies extract oil and natural gas from areas that seemed impossible in the past. This has helped the United States become the largest producer of oil and natural gas in the world. However, an increase in the supply of oil should help lower the price unless there is a commensurate increase in demand.

Saudi Arabia has also expressed that it would be more comfortable with lower oil prices for a longer period of time. Some have viewed this as a political deal with the United States to pressure Russia who relies on a high oil price to balance its budget. However, Saudi Arabia may also be trying to put pressure on shale drillers in the United States who rely on higher oil prices to remain profitable.

Since the 2008 recession, a new breed of U.S. oil producers have brought previously barren fields back to life with new technologies. Investment in the U.S. had suffered a setback from the housing crisis, but had comeback in a major way with the shale boom. New technologies and higher oil prices allowed these new shale companies to generate spectacular amounts of cash flow, but they also needed a lot of capital. Most of these companies began to accumulate debt to finance their operations, which was fine so long as the price of oil remains high. In many ways these companies' success has also been their own undoing. As they continue to produce more and more oil they create a glut.

An oil glut and a mountain of debt is a really big problem for companies whose cash flow relies on selling oil. Global demand is anemic. Europe is showing signs of weakness and a recovery does not seem likely anytime soon. In the past, China had been able to meet the demand but is now showing signs of slowing in addition to debt problems of their own.

The largest junk bond ETF HYG is very exposed to oil and drilling companies. In fact, oil and drilling companies is the largest sector component of the ETF. Oil drilling companies had been one of the major beneficiaries of 'the reach for yield' by pension funds and other investors who have been willing to accept more risk for higher yielding bonds. The last chart on the right shows how junk bond yields are now beginning to rise. This poses a problem for oil drillers that need to refinance or who were relying on debt to fund their operations. Desperate oil drillers may even produce more oil at lower and lower prices in order to meet debt obligations even though increased production could put more downward pressure on the price of oil. This feedback loop could create a nightmare scenario for these producers.

While a strong rebound in the price of oil would eliminate many of the short term problems for these companies, the longer term risk will remain. Many of these companies are saddled with a shocking amount of debt and are notorious for taking enormous risks in search of big profits. History is littered with failed oil companies who overextended themselves, and this time is likely not any different. While I don't think it is time to panic, I believe the next recession will almost certainly lead to numerous bankruptcies amongst the oil and gas producers.

This chart shows the price of light sweet crude oil for December Delivery.