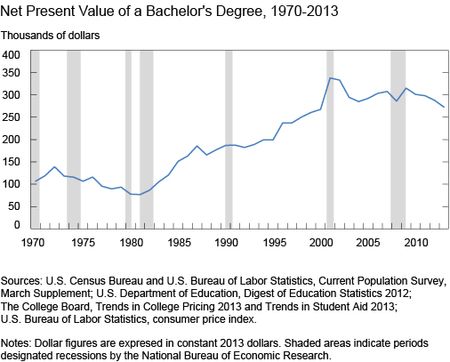 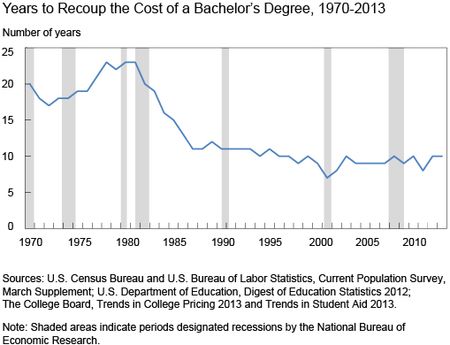 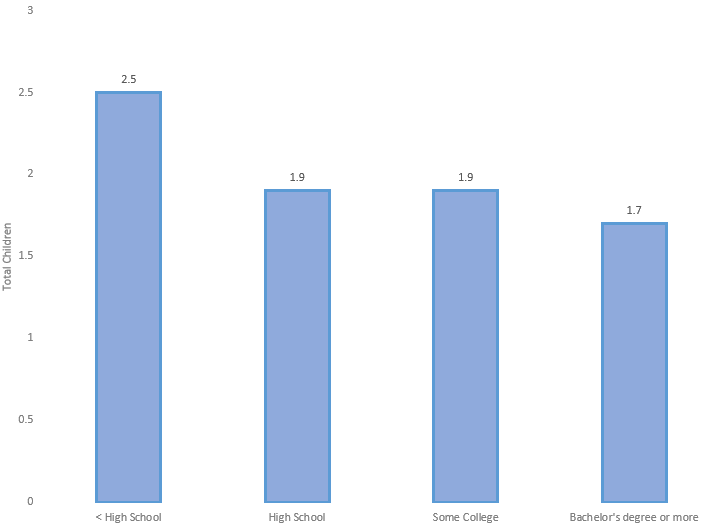 This week’s post is the second in a series about student loans. You can read the previous post here. This week I want to look at some of the possible consequences of the rise in student loan debt and how it is impacting the US.
Before I get into the problems associated with student loan debt I should address the argument that “college isn’t worth it anymore”. College is still worth it even with the increased cost. On average, a college graduate earns about 80 percent more than those without a college degree. They are also less likely to be unemployed. The New York Fed created a chart shown in figure 1 that shows the net present value (NPV) of a bachelor’s degree over time. The chart shows that although the NPV of a Bachelor’s degree has come down somewhat from its peak in 2000, it is still much higher than the average cost of tuition. Figure 2 shows the number of years it takes to recoup the cost of a Bachelor’s degree, which has remained stable over the last several years. There are also numerous intangible benefits to getting a college degree such as increased happiness, a sense of accomplishment and learning how to learn.
So if a college education is still worthwhile financially, what’s the problem? College is increasingly paid for by student loans rather than by parents, scholarships, or work-study. If a graduate is carrying a lot of student loan debt it is much harder to qualify for a loan to purchase a vehicle or a home. Student loans increase a borrower’s debt-to-income ratio which is a key metric that banks use when making loans; if a borrower’s monthly payments on debt are too high relative to their income they will be automatically declined.
Student loan debt could even be impacting household formation. Figure 2 showed that although it may be worth it in the long run, it can still take about ten years to recoup the cost of a bachelor’s degree. This means that for most borrowers they will not be free of student loans until they are in their mid-thirties or later. Most people don’t want to start a family unless they are stable financially and in many cases they also want to own a home in a good neighborhood. However, just when many graduates are beginning to pay off their student loans, women begin to lose their fertility. According to a pew research survey, women with a bachelor’s degree are twice as likely as all other mothers to give birth over age 35. Figure 3 also shows that educated women generally have less children. The burden of student loans could be a reason why educated women tend to have less children. Of course the real answer is probably more complicated and one could also surmise that women who have children are less likely to get educated because their excess time and money is devoted to their children.
Household formation is a key driver of growth in the U.S. economy. Social Security relies on a growing population and it is important to the financial health of the United States that those children come from educated households that are more financially stable. The solutions are not entirely clear, but any long lasting solution would need to involve reducing the cost of education or a student loan repayment option where families do not have to repay their loans until later in life. It would be a lot easier for graduates to begin repaying their student loans when they are in their 40’s or when they reach a certain income level rather than when they are first starting their careers. Since student loans are now almost entirely in the domain of the federal government, perhaps they should look for a way to tweak the repayment structure rather than simply lowering interest rates and extending maturities.