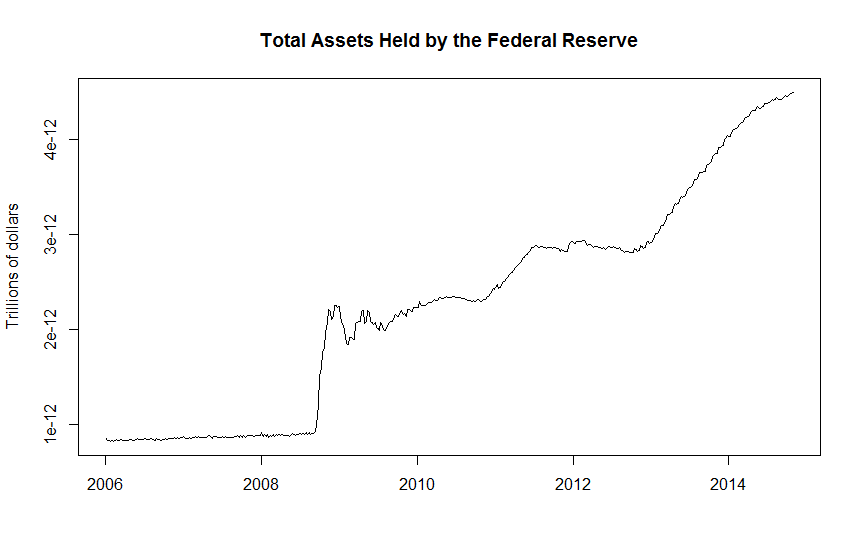 The Fed’s Balance Sheet
Quantitative easing changed the look of the Federal Reserve’s balance sheet pretty remarkably as you can see from the chart on the right. Quantitative easing wasn’t as simple as just printing money as many have claimed. The fed did create reserves, but those reserves were swapped in exchange for treasuries and mortgage backed securities on the open market. When the fed buys treasuries in the open market they show up as an asset on their balance sheet and reserves credited to banks show up as a liability. The fed’s balance sheet is composed mostly of treasuries and mortgage backed securities but they do have other assets as well. The fed has a great breakdown of the different types of assets that they hold on their balance sheet here.
Quantitative easing increased the duration of the Fed’s balance sheet. Think of treasuries and cash as the same thing except that a treasury bond is dollars payable over 30 years whereas cash is dollars payable now. By increasing the duration of its balance sheet, the fed reduced the duration of balance sheets at commercial banks. The hope of the fed was that this would allow banks to make more loans. When a bank makes a loan they are actually putting new money into the economy that wasn’t there before.

Banks did end up making more loans, but the loans went into very specific endeavors. Bank lending to consumers has not picked up, but bank lending to corporations has. Most major corporations took advantage of this policy to borrow money and used the proceeds to buyback shares in their own company. This had the effect of increasing earnings-per-share because less shares means a smaller denominator in that equation, which leads to earnings beats in their quarterly results. In a sense, I see this as asset price inflation and is why quantitative easing did a lot for stocks, but not much for the rest of the economy. I see share buybacks as a huge positive when shares are historically cheap, but an incredible waste of money when shares are expensive so the effectiveness of share buybacks should be viewed on a case-by-case basis.

QE isn’t really over
The fed is still reinvesting the interest that it receives from its holdings and when you have over $4 trillion in treasuries and mortgage backed securities the interest is pretty substantial. If the fed wants to reduce its assets they have tools that they can use to reduce their holdings such as reverse repos, raising interest on excess reserves, or just letting the bonds and mortgage backed securities expire. So far the fed has made money on quantitative easing, but in the event that the economy is overheating they could end up taking a loss in real terms on their holdings. This really doesn’t seem like a terrible problem to have, because the Fed will be more likely to make money if the economy does poorly because treasuries will be in demand, rates will come down and the value of the Fed’s balance sheet holdings will increase.