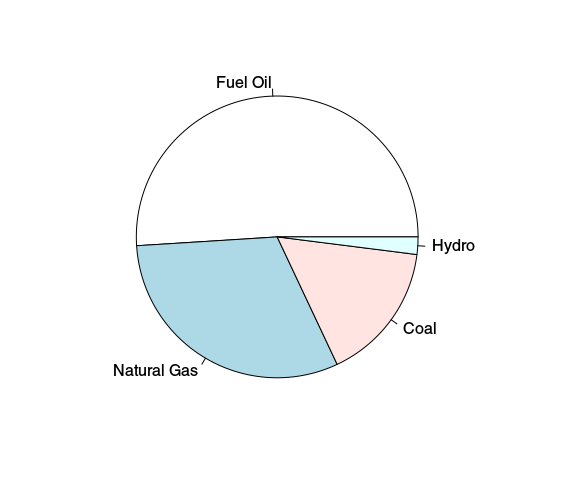 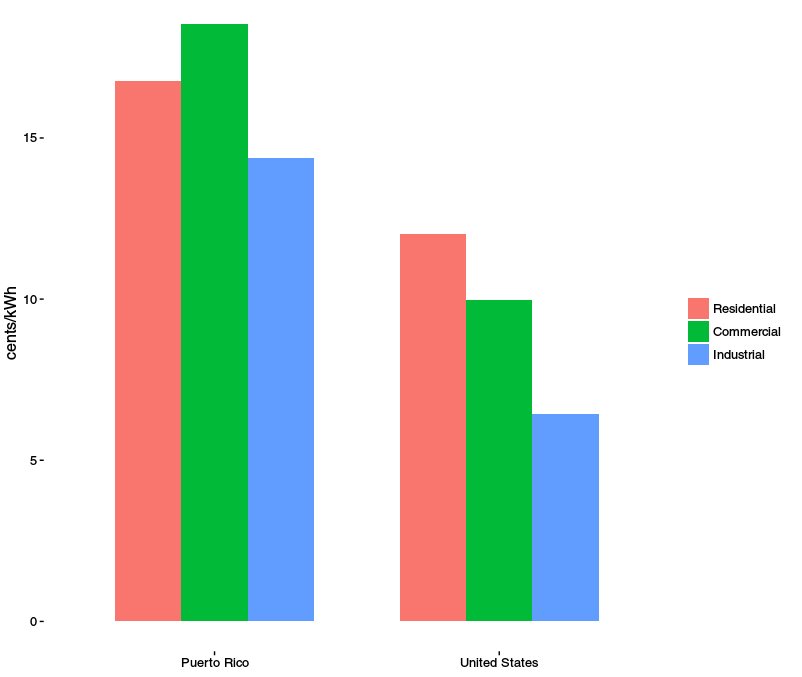 This is part III in a series on Puerto Rico, you can part I hereand part II here

Puerto Rico has struggled with economic hardships, a declining population, overwhelming debt and unfavorable changes to the tax code. As if these problems weren't enough for one country to deal with, the various municipalities of Puerto Rico have not exercised the appropriate fiscal measures. Instead, Puerto Rico's governments have added to the problems of Puerto Rico's citizens.

PREPA
The Puerto Rico Electric Power Authority (PREPA) is responsible for generating and delivering power to the citizens of Puerto Rico. PREPA generates most of its electricity from fuel oil. Figure 1 shows a breakdown of PREPAs electricity generation. Puerto Rico does not have any fossil fuels on the island so it must import fuel oil from abroad. Fuel oil is by far the largest of PREPA's expenses. Puerto Rico is a good candidate for wind, solar, hydroelectric and nuclear power yet because of lack of competition and poor management, PREPA has not invested in any of these. In recent years, private corporations have begun generating renewable electricity and selling it to PREPA.

PREPA is a government monopoly that was formed in 1941 and is responsible for more than $9 billion of Puerto Rico's roughly $72 billion debt. PREPA was formed by the last American governor of Puerto Rico, Rexford Tugwell. Tugwell was a member of FDR's brain trust. Tugwell was a vocal opponent of free markets and admirer of the collectivized system of Soviet Russia. As governor, he nationalized the private power companies on the island claiming that in order “for electricity to benefit the people, it had to be owned by the people.”1

As part of the nationalization and creation of PREPA, municipalities did not have to pay for their electricity usage. This exemption also applies to specially selected private corporations and certain government enterprises. This meant that there was no check on power consumption, nor any reason to conserve power. This led to municipal-owned attractions to generate revenue such as an ice skating rink, which uses a lot of electricity when located on a tropical island (You can read more about the ice rink here).

PREPA runs a large deficit as a result of all the free electricity it provides. PREPA has entered into forbearance agreements with its major creditors and those agreements have been extended numerous times. However, they have recently reached an agreement that will involve major restructuring and a “transition surcharge” that will be added to consumers bills. This could be a problem for Puerto Ricos struggling citizens who are already paying about 50% more than mainland U.S. consumers. Figure 2 compares the cost of electricity in the United States versus that of Puerto Rico.

Puerto Rico would be on the verge of bankruptcy if it were allowed to declare bankruptcy, but it is specifically excluded under chapter nine of the U.S. bankruptcy code which allows insolvent local governments to restructure. Puerto Rico was excluded by congress in    &nbsp1984 when a small technical change was introduced without any discussion in Congress. It is unclear why it was excluded in the changes, but it seems most likely that it was an unintended mistake that has persisted to this day. Puerto Rico went in front of the Supreme Court to argue for the right to go bankruptcy. The court seemed sympathetic with both Ginsburg and Roberts expressing confusion as to why congress added that stipulation. Treasury secretary, Jack Lew, has also pressed congress to reform this law.

&nbspThe government of Puerto Rico has shown little interest in changing any of their numerous failed policies until now that it is too late. Equally responsible is the U.S. government and it's experimentation, lack of consistency and negligence when it comes to Puerto Rico. Puerto Rico needs to make major reforms and that should, in my opinion, include making Puerto Rico the 51st state, requiring a balanced budget as part of their state constitution, and privatizing PREPA. The statehood movement has been growing in Puerto Rico and has reached a point where the majority of the country is in favor. Most of the benefits of not being a State have been stripped from Puerto Rico and now it seems cruel and unnecessary to maintain the status quo.