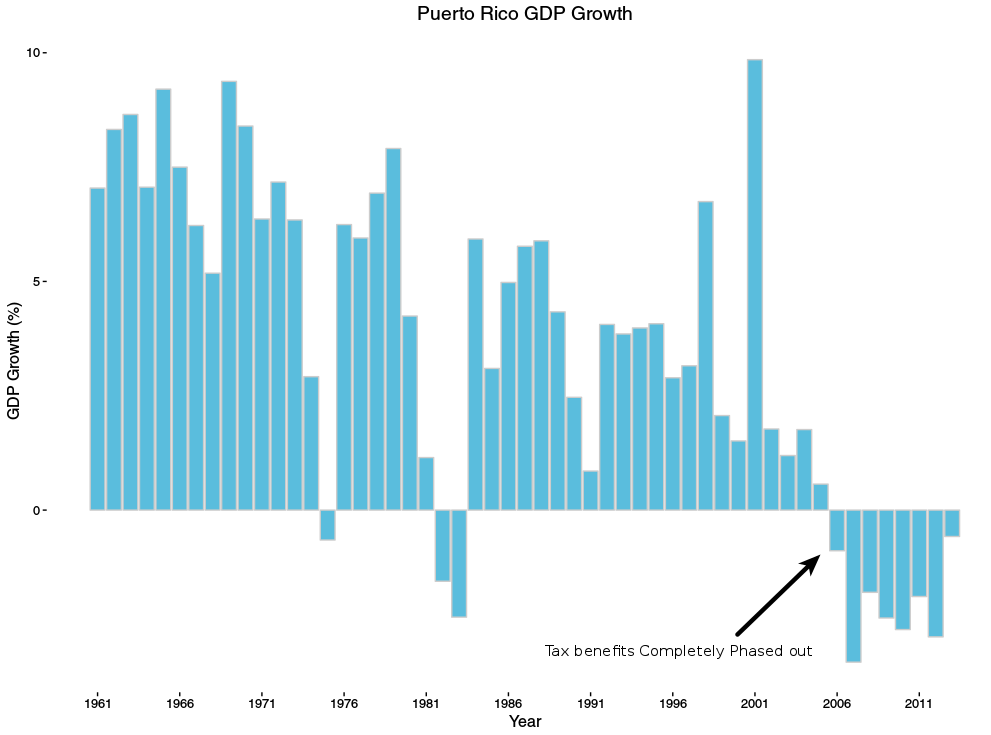 This is part II in a series on Puerto Rico, you can read part I here.

Historically, tax policy has played a major role in the development and prosperity of Puerto Rico. Tax policy made Puerto Rico's economy much different than its Caribbean neighbors. Tax incentives were provided to U.S. corporations in a piecemeal fashion with no clear long term policy. The most important piece of the puzzle was section 936 of the U.S. tax code.

There were many tax benefits that were intended to boost the industrialization of Puerto Rico, but the most important piece was section 936. Section 936, passed in 1976, allowed U.S. corporations a tax exemption from income generated in U.S. territories. Additionally, the government of Puerto Rico gave incentives to subsidiaries of U.S. corporations operating in Puerto Rico which allowed subsidiaries to avoid corporate income taxes. As you can imagine, this became a major driver for economic activity in Puerto Rico. U.S. businesses began relocating to Puerto Rico to take advantage of the tax incentives. Puerto Rico benefited from an increase in local jobs as well as a 10% tax on profits sent back to the mainland.

Manufacturing makes up almost half of Puerto Rico's economy. This is unusual compared to its neighbors whose largest component of GDP is generally agriculture. The tax advantages offered by Puerto Rico were especially advantageous to biotechnology companies. Puerto Rico became the third-largest biotechnology manufacturer and the seventh largest medical-device exporter. After the phaseout of section 936 Puerto Rico has seen increased competition from other countries such as Ireland who have more favorable tax advantages and countries such as China and Brazil which have lower labor costs. Puerto Rico will likely be able to maintain advantages because of the infrastructure that was developed over those 30+ years as well as a highly educated/specialized workforce.

In the early 90's the Clinton administration and congress made it a priority to raise revenue and cut the federal deficit. This push extended to Puerto Rico where section 936 was seen as a handout to big business. Puerto Ricans fought to maintain the credit, but ultimately failed and in 1996 Clinton signed legislation that would phaseout the tax credits over the next ten years. It was not coincidental that as soon as the tax incentive expired in 2006, Puerto Rico entered a recession that it has not been able to escape for nearly a decade. Figure 1 shows GDP growth from the sixties through the present. It is clear that the lack of tax incentives have made Puerto Rico less appealing to manufacturers. The repeal of 936 also meant that Puerto Rico lost its ability to tax profits send back to the mainland. This meant that money that had built up in Puerto Rico's banks was now free to leave. Needless to say, a massive outflow of bank deposits is never good for the banking system.

In the mid-1980s section 936 deposits accounted for more than 40 percent of total bank deposits. According to the FDIC, when section 936 was repealed, banks lost more than 90 percent of manufacturing deposits. This contraction in deposits along with a slowing economy has led to numerous bank failures. One of the more high profile failures was that of Doral Bank, the third-largest bank in Puerto Rico, which failed after years of scandals and accounting fraud that were revealed after the tide of section 936 deposits rolled out.

The repeal of section 936 is the most clear-cut cause of Puerto Rico's financial problems. The decline in GDP growth, population and revenue from taxes has led to numerous fiscal hardships for the country. However, there are still more elements that have contributed to Puerto Rico's difficult situation. Next week we will wrap up our series on Puerto Rico by looking at some of the other challenges facing this country.