The U.S. Dollar Relative to the Yen

This chart shows the last five years of the U.S. dollar relative to the yen.
× 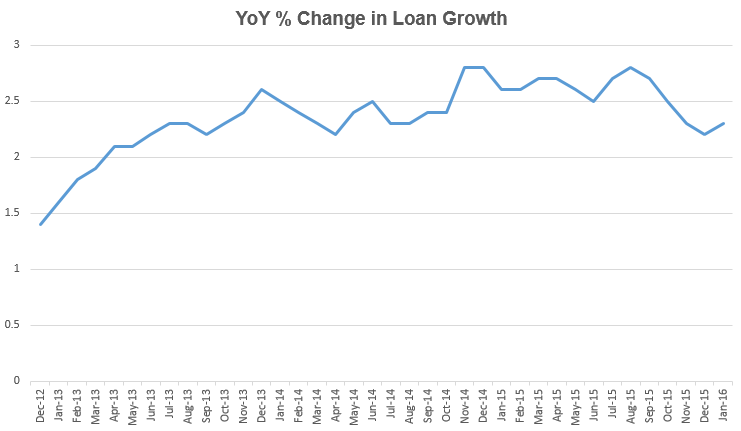 Once again Japanese economic growth fell in the 4th quarter of 2015. Economists were expecting an annualized decline of 0.8%, but instead GDP contracted 1.4%. In January, the Bank of Japan surprised the markets by taking interest rates negative for the first time, lowering the deposit rate to -0.10%. Initially, the yen weakened, but a few days later it began falling at the fastest pace since Abenomics began. Figure 1 shows the recent activity in dollars relative to yen. This week we’ll take a closer look at Japan’s economy and how their policy actions might affect global markets.
The main goal of Abenomics was to end the cycle of deflation that has plagued Japan for decades through monetary and fiscal stimulus as well as regulatory reforms. So far they have lowered interest rates and conducted quantitative easing which has helped exporters by weakening the yen. Since Abe took office the yen has lost about 40% relative to the dollar. Despite this significant fall, inflation has not reached their 2% goal. This is partially related to global deflation caused by the drop in commodities prices which is a good thing for resource strapped Japan. Inflation has also been slowed by Japan’s tax policy.
In April of 2014 Abe raised sales tax from 5% to 8%. After that move, Japan saw a severe drop in GDP growth of -7.7% and has oscillated in and out of recession since. In fact, they are most likely in a recession again right now. The strange thing about this sales tax increase was that in 1997 the exact same thing happened when they raised the tax from 3% to 5%. Japan is a consumption based economy, so if you increase taxes on consumption, you are almost guaranteeing a recession. In 2015, Japanese exports grew 2.7% while private consumption fell 1.2%. The sales tax is scheduled to rise again in 2017 to 10%, something the IMF has said is necessary if they want to achieve fiscal sustainability.
Japan is in an impossible situation. They have a large ageing population which will create problems for their social security, pensions and healthcare costs. Japan already has the highest debt-to-GDP ratio of any country, but that debt is held mostly by its own citizens. This means that they are less likely to panic and sell.
Kuroda has expressed that he is willing to take rates much deeper into negative territory. This would be an interesting development because it may be the final straw for Japanese bondholders. In the short term, the value of existing bonds will appreciate, but newly issued bonds that require the bondholder to pay the Japanese Government for the privilege of lending them money will be a trickier sell. However, if the Japanese do continue to buy negative rate bonds, they would essentially be transferring household wealth to pay down government debt. This situation seems unlikely without a weaker yen.
The government has been very clear in their desire for a weaker yen. Although it was neither confirmed nor denied, many market participants (myself included) suspect that the Bank of Japan intervened last week to weaken the yen. This event on Thursday morning helped trigger a rally in not just the dollar-yen currency pair, but also in global stock markets, which have been under pressure all year.
Back when quantitative easing was still flowing a very popular trade was to borrow in yen and invest in the U.S. often in S&P 500 futures contracts. This trade worked unbelievably well for many years, but now that corporate profits have stalled in the U.S., the unwind of this trade has led to flows back to Japan. I suspect that these flows have accounted for much of the strength in the yen this year. I also suspect that this will only be temporary, depending on the strength of United States economy.
There is currently a lot of uncertainty in the Japanese economy and traders will begin to feel more comfortable once there is clarity on the 2017 sales tax or even a cut to the existing tax. Traders are also concerned about the recent decision to take interest rates negative, the vote of Bank of Japan governors was 5-4. Those in favor were most likely wanting to stimulate lending which has been showing signs of weakness recently, see figure 2. The dissenters were concerned on the impact that negative rates would have on the economy and they will likely be emboldened after seeing the violent market reaction following the decision. Central banks should avoid being influenced by short term market movements though and make their decision based on what happens in the longer term. The one thing that is clear is that the market hates uncertainty and the sooner the Abe administration can alleviate these concerns the better it will be for a weaker yen as well as global stock markets.

The U.S. Dollar Relative to the Yen

This chart shows the last five years of the U.S. dollar relative to the yen.