This chart shows the interest rate on Swiss government bonds. As you can see rates are negative for bonds that mature in 10 years or less.
× 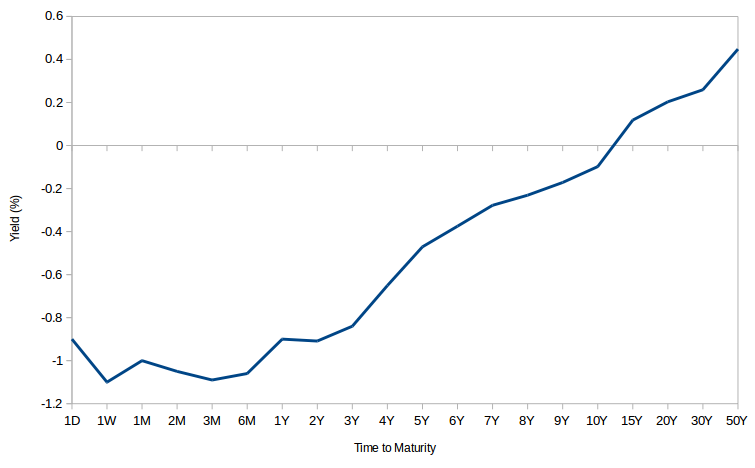 Would you be interested in refinancing your mortgage to a loan where you pay no interest to the bank and instead they pay you a small amount of interest every month? Sorry to get your hopes up, I'm not offering this deal, however if you live in Sweden or Denmark this may be a possibility soon. Many countries have entered a world of negative interest rates where you get paid to borrow money and you have to pay to save it in a bank. If this sounds crazy that's because it is, in fact it was believed by most economists that rates could not go below zero. As recently as 2013 Paul Krugman wrote, “Remember, interest rates can’t fall — the zero lower bound isn’t a theory, it’s a fact, and it’s a fact that we’ve been facing for five years now.” Well it turns out it wasn't a fact because we now have negative interest rates in many European countries, if you want to “invest” in Swiss government bonds you will have to lend it to them for at least 15 years if you want a positive nominal return, as yields are negative on all Swiss bonds maturing within 10 years.

Let me make a quick distinction first between real and nominal. Negative real interest rates have not been unusual and were well understood by economists. Negative real rates occur when the yield is less than the expected rate of inflation over the same time period. For example, if you buy a government bond that pays 1.5% and the expected inflation rate over that time period is 2%, then you will have a negative real interest rate. Anyone who has a savings account at a U.S. bank should be familiar with this concept by now.

Negative nominal rates are different. A negative nominal rate means that you are guaranteed to receive a negative interest rate if you hold the bond to maturity. For example, let's say you buy a 5 year German bund that pays -0.11% denominated in euros. You will be required to pay a small amount of money to the German government for the privilege of lending them money. When your bund matures in 5 years you will receive the amount that you originally invested minus the negative interest you paid to them over that time. When an investor buys one of these bonds they are guaranteed to lose money. So why would anyone in their right mind invest in a negative yielding bond?

One reason that an investor may decide to invest in a negative yielding bond is that they expect the yield to become even more negative in the future. Remember that as bond yields fall the price of existing bonds rise. This is a fundamental concept when trading bonds but can be a bit confusing if you are not familiar with it. Since bonds are tradeable you can buy a U.S. treasury bond today and easily sell it to another investor at any time. If you bought a brand new 10 year bond and sold it 3 years from now you would collect six interest payments (payments are semi-annual) and the bond would still have 14 more payments plus the original principal amount that you paid for it. Your bond is now basically the same thing as a brand new 7 year U.S. government bond. Now imagine that the interest rate was 2% when you bought it, but the interest rate on new 7 year bonds has fallen to 1.5%, all of a sudden your 2% yielding bond looks pretty good and since it is basically the same thing as a brand new 7 year treasury the price of that bond will rise accordingly and you can sell it to another investor and reap the profits.

In fact, investors who were buying bonds when rates first went negative have made money on the negative yielding bonds because rates fell even further. Another reason why investors may own negative yielding bonds is because they expect deflation. In the same way that a real rate can be negative because inflation is higher than the yield on a bond, if the rate of deflation is greater than the yield is negative then the real return will be positive. That's one explanation, but then again why pay the negative rate at all? Why not take all your money out of the bank and stuff it in a mattress? That would obviously be preferable were it not for the risk that someone could make off with your life savings if they knew where you were hiding it. There is some value in the safekeeping and convenience that a bank provides. Also, it's not very practical to take your money out of the bank if you are a major corporation, you'll need to find a really big mattress. Of course, alternative money storage facilities may take the place of banks if rates were to go significantly more negative. A business that hoards cash in storage deposit boxes and efficiently transfers it to a bank account may begin to emerge.

This is a two-part post that I will continue next week where I'll look at the impact of negative interest rates on businesses and currencies. I will also discuss why I think it can't last.

This chart shows the interest rate on Swiss government bonds. As you can see rates are negative for bonds that mature in 10 years or less.