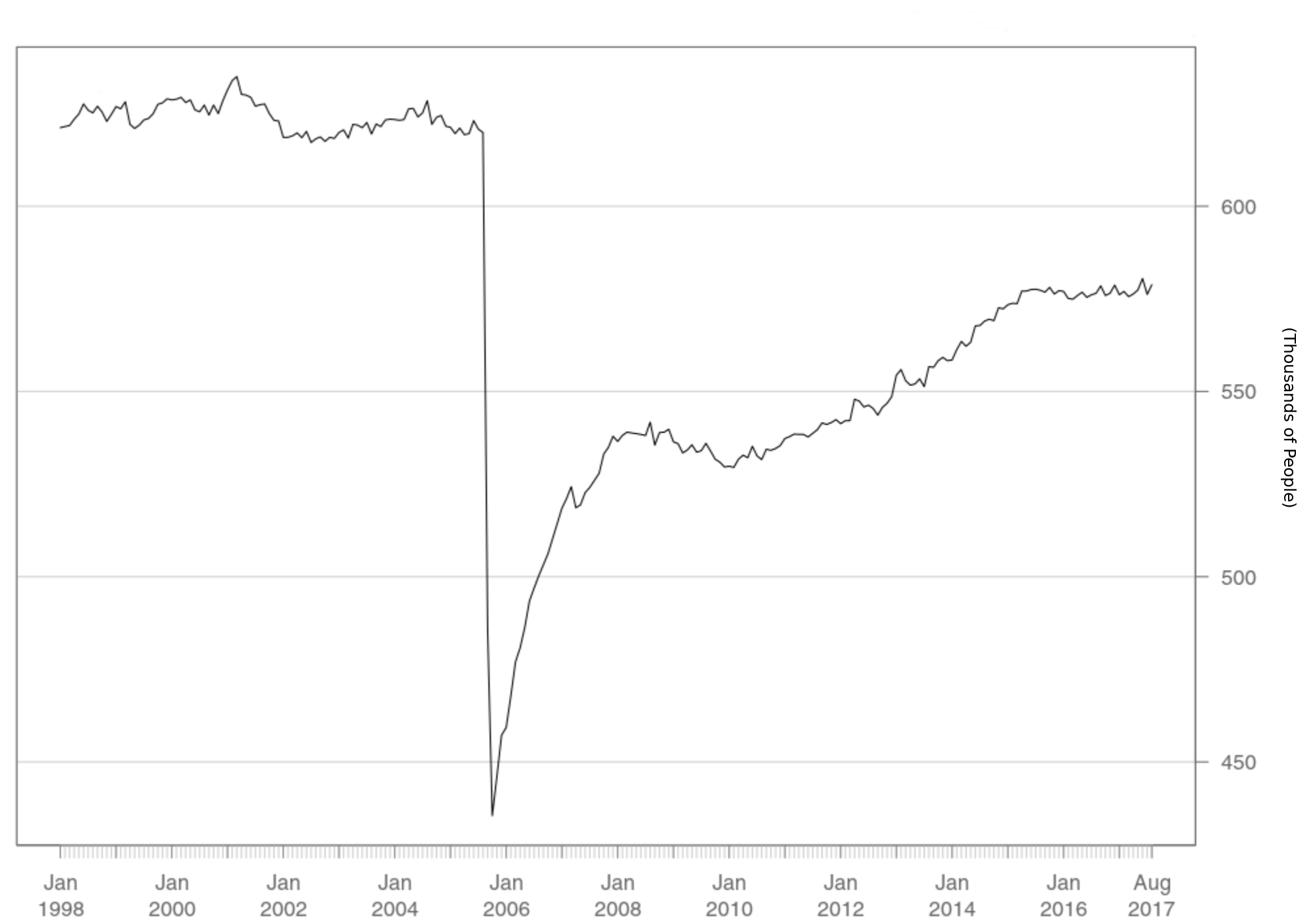 Two major hurricanes have already impacted the United States this season and it looks like hurricane Maria might be on its way to becoming the third. According to Accuweather, Hurricane Harvey will surpass Katrina to become the costliest weather disaster in U.S. history at $190 billion. Estimates for Irma are in the $100 billion dollar range, making this the most expensive hurricane season yet. Thankfully the combined death toll for both of these hurricanes will not be anywhere near Katrina. So far the market has brushed these hurricanes off, but there will no doubt be a significant impact in GDP in the third quarter. This week I want to discuss the economic impacts on the economy as well as some of the speculative frenzies that accompany hurricanes.

One of the main reasons why Harvey is expected to be so costly is because of the huge number of people affected. Houston is the fourth largest city in the United States and is growing significantly faster than the top three cities. Houston has a population of 2.3 million people (6.7 million metro) compared to New Orleans which had less than half a million (1.3 million metro in 2004 when Katrina hit). According to the St. Louis fed, the Houston metro area makes up 2.1 percent of total U.S. payroll employment while the New Orleans metro made up roughly half a percent. In September and October 2005, New Orleans metro payrolls fell by 184,000 or about 30 percent. While there was a rebound in the following months, New Orleans still has not recovered in terms of total payrolls (It isn’t difficult to see when Katrina hit in figure 1). Considering gains in non-farm payrolls in August were 156,000 for the entire country (expectations were for 180,000), there is a very good chance that we could see continued weak growth in September and possibly October before a recovery.

The petrochemical industry is a huge part of the Houston area’s economy. When Harvey made impact, several chemical plants and refineries were damaged or forced to shutdown due to flooding. This will almost certainly have an impact on future industrial production numbers. Katrina impacted similar industries in Louisiana, but oil prices were much higher and offshore oil was more critical in 2005. Industrial production fell 1.8 percent in September 2005 after Katrina made landfall in late August. It will be important to watch the next few industrial production numbers to get a good idea of the impact on the economy. It is still too early to know how this will impact GDP numbers, but Harvey plus Irma will no doubt have a significant negative impact in the short term. Estimates have ranged all over the place from as low as .2% to 1%. I suspect that it will be closer to the higher estimates.

Florida’s license plate has a picture of oranges on it, and deservedly so. More than 90% of U.S. orange juice is made from Florida oranges. So when a hurricane comes storming through the state it can cause strange effects in the orange juice market, take a look at orange juice futures for November delivery in figure 2.

When the power goes out, the generators kick on. Generac, a company that specializes in generators trading with ticker GNRC, surges every time there is a major storm. Usually the stock goes back to normal after a short lived mania. Figure 3 shows GNRC surging nearly 30% (there has also been takeover rumors during this run, good timing from management).

Insurance companies have been volatile as speculators try to assess the damage and the claims that insurers will be hit with, there has also been speculation in companies that sell boats and much more.

It seems that the general markets have shrugged off the impact of the hurricane and are pricing in the hurricane as a minor issue over the long term, but these hurricanes will have a major impact in the lives of the people affected, the local economies where the hurricanes made landfall and the wider U.S. economy over the next year or longer.