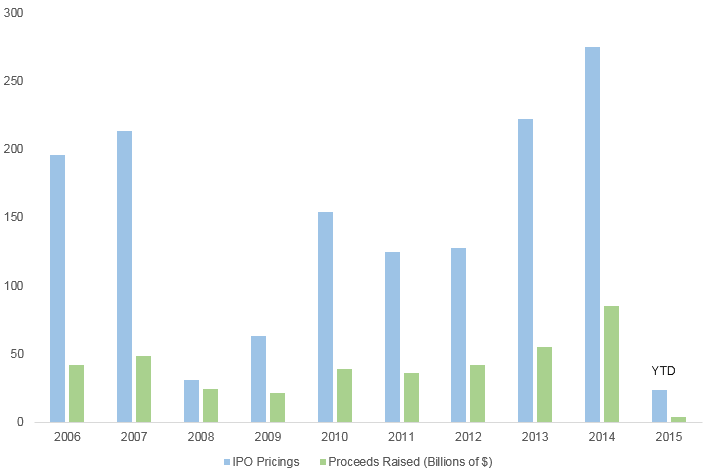 This is image is only an example of a red herring and is not a solicitation to buy El Pollo Loco stock.
× 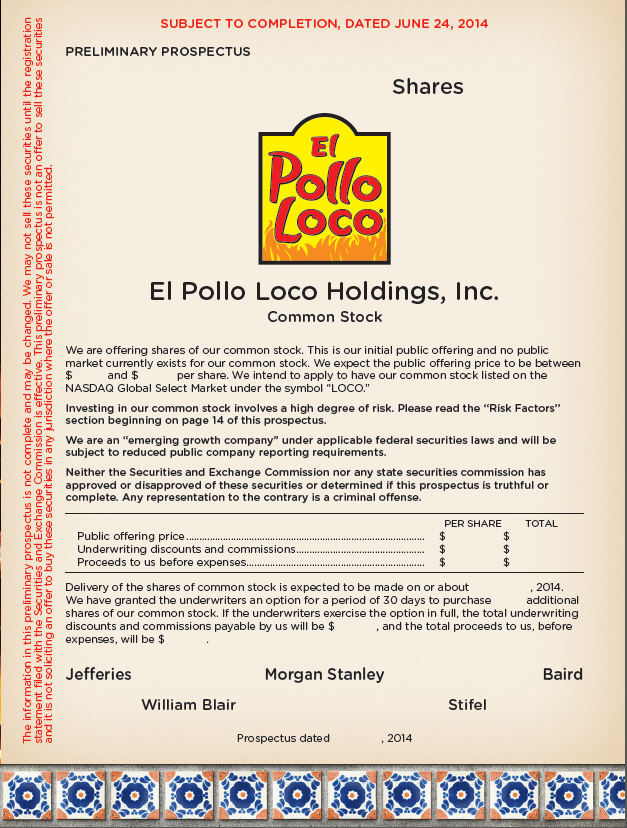 How Stocks are born

2014 saw the most initial public offerings (IPOs) and raised the most money from IPOs since 2000. In 2014 there were 273 IPOs (excluding closed end funds and special purpose acquisition companies) and about $85 Billion was raised, whereas 2000 had 406 IPOs and raised about $97 Billion. Figure 1 shows that 2013-2014 were both much better years for IPOs than the peak of last economic cycle 2006-2007, both in terms of amount raised and total IPOs. This week I’m going to discuss the basics of the IPO process.
Going Public
There are several advantages and disadvantages for a company that goes public (issues an IPO). The most common motivating factor is a need or desire for additional capital and ongoing access to the capital markets. Alternatively, the most common reason not to go public is that private shareholders would give up control of some of the company. The easiest way to explain this is through an example:
Let’s say XYZ co. is owned by Jane Doe who owns 10,000,000 shares that represent 100% ownership of the company. Jane decides that she wants to expand the operations of XYZ co., but doesn’t want borrow money; instead she decides to raise money through an IPO. Jane decides to offer 1,000,000 shares of XYZ co. to the public. She gets in touch with her investment banker Bob Jones at Goldman Sachs and tells him that she wants to go public. He says that they will be able to sell the shares at $50 per share for a total amount raised of $50,000,000. He also informs her that there will be a 7% underwriter’s discount (also called the gross spread) or $3,500,000; this is the difference between the price Goldman will pay XYZ co. and the price that it hopes to sell the securities to the public.
Underwriting a new issue involves risk especially with larger issues. An IPO can be undersubscribed, oversubscribed or fully subscribed. A fully subscribed deal occurs when the new issue is sold in its entirety for the exact offering price. An oversubscribed deal means that demand exceeds supply, meaning there was more interest in the shares being sold than shares available to sell, this is a good situation for the underwriter but it may mean that issuer left money on the table. If an issue is undersubscribed (supply exceeds demand) then the investment bank will not realize the gross spread, because they are selling the shares below the price paid to the issuer. In order to minimize that risk, Bob Jones reaches out to other investment banks and forms a syndicate agreeing to share the gross spread with the other banks.
Bob Jones and his newly formed syndicate may also form a selling group to help drum up interest for XYZ co. The selling group will include Goldman, the syndicate of investment banks and may include others who can purchase the stock at a price lower than the public without taking on the risk of underwriting. The gross spread will now be split between Goldman, the other underwriting investment banks, and the selling group.
The SEC requires that the issuer of a new security file a registration statement that includes essential facts about the business such as:


Here is an example of Facebook’s registration statement. The underwriter is required to perform due diligence on the issuing company and represents that the statements made are accurate. The time after the filing of the registration statement and before it becomes effective is known as the waiting period. During this time the underwriter can distribute preliminary prospectuses known as red herrings because of the red ink at the top. See figure 2 for an example of a preliminary prospectus. However, underwriters cannot sell shares or accept offers during this time.
In the days leading up to the IPO the price is finalized based on demand for XYZ co. There is a lot of buzz surrounding XYZ and the stock opens at $20 and begins surges to $30 by the end of the day. XYZ is now a publicly traded stock and anyone can buy or sell it in the secondary market. The underwriters will help create a market for XYZ by being a willing buyer and seller of the stock. Since XYZ is now valued at $30 per share and there are now 11,000,000 shares (Jane’s 10,000,000 shares plus the 1,000,000 issued to the public) XYZ is now worth $330,000,000 and Jane’s shares are worth $300,000,000. XYZ co. receives the cash from the IPO minus the underwriter’s discount (and other various expenses associated with the IPO). This is a very basic overview of how company’s go public, next week we will look at more details of share issuance.

This is image is only an example of a red herring and is not a solicitation to buy El Pollo Loco stock.