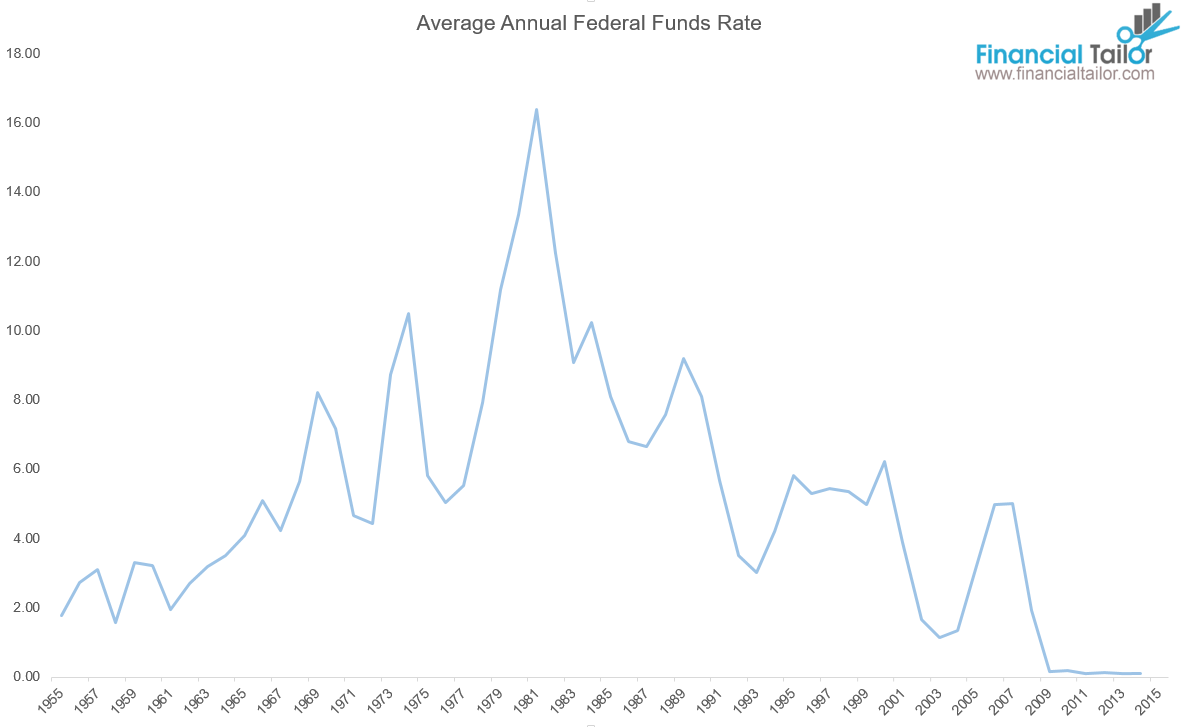 This week should be exciting for fed followers. This Wednesday the FOMC will meet and announce its policy decision about interest rates the following day. Many expect the fed to raise rates at either this meeting or the December meeting, mainly because the September and December meetings are followed by a press conference while October is not. The fed has maintained a federal funds rate target of less than 0.25% since 2008, and they have not raised interest rates since June of 2006. Figure 1 shows the federal funds rate going back to 1955. This policy is often referred to as ZIRP (Zero Interest Rate Policy). Although most participants are not expecting an increase of more than 25 bps, a rate hike would signal a major change and would have wide ranging impacts for borrowers, lenders and global currencies.
Why it matters
Even though the change in the fed funds rate is not expected to be significantly higher it still signals a major policy shift. For over three decades the general trend of interest rates has been down. While there have been periods of rising rates since then, they have never lasted more than a few years and were followed by even lower rates. This has profound implications for how businesses operate. For example, in a falling interest rate environment, a business that refinances its debt every several years can expect to reduce its interest expense. A period of steady inflation and falling interest rates creates an ideal environment for businesses to increase their leverage, that is, their debt. After all, if you know that a dollar now is worth more than a dollar five years from now and that you will be able to refinance your remaining balance at a lower rate, why not borrow as many dollars as you can (assuming your business is profitable)?
Lower interest rates are also very important for the consumer. When banks make loans they look consider the debt-to-income ratio of the applicant. If an applicant makes $5,000 per month and they spend $2,000 a month to pay their mortgage, auto and other loans they have a debt-to-income ratio of $2000/$5000 or .40. The lower the debt-to-income ratio the easier it is to approve the borrower. An applicant can do three things to lower their debt-to-income ratio: They can pay down loans in order to reduce their monthly payments, they can increase their income (if only it were that easy) or they can refinance their existing loans. Let’s say the applicant has a $200,000 mortgage with a 6% interest rate, their monthly payment (excluding taxes insurance, etc.) is about $1200 per month. So if they can refinance their mortgage at 4% instead they’ll only pay about $950 per month. Now their debt-to-income ratio is $1750/$5000 or .35 making them more attractive to lenders. That ratio could be lowered further by refinancing other debt. One major contributor to the housing bubble was subprime lenders offering borrowers mortgages under the assumption that they would be able to refinance at a lower rate in the future. Once interest rates were raised in 2006 the constant refinancing scheme came to an end and the subprime lenders disappeared.
Most senior investment professionals and executives have spent their entire lives in a period of falling interest rates and steady inflation. Recently, inflation has been below the fed’s unofficial target of 2%; adding a rising rate environment to the mix would require banks and businesses to rethink their model. A rate increase would likely lead to more deleveraging and perhaps even deflation. The beneficiaries of such a move would be individuals and corporations with small or no debt burdens and more cash in banks, such as senior citizens.
I believe that the fed is looking at wages as the major driver of inflation going forward, and with several municipalities and states raising or scheduled to raise minimum wages in the coming months, they may be anticipating inflation for this reason. I am also expecting wage pressure because of announcements made by Walmart, Gap, TJ Maxx, McDonald’s, Ikea, Aetna, Starbucks, Costco and many other lower-paying retail jobs. Most of the increases announced by these companies are multi-year plans that either just began or are expected to begin in the next few months. I think that the fed should wait to see how these raises play out. Walmart, one of the first to start this trend, showed bottom line weakness in its most recent quarterly report directly related to these wage hikes. However, if these increases stick then I would expect to see an uptick in inflation, perhaps to the point where a small rate hike would be appropriate. However, sustained runaway inflation does not seem very likely at the moment considering we are seeing collapsing commodities prices and global turmoil.
My guess, and I would like to stress that this is only a guess, is that the fed will mention that they are concerned about developments in China and emerging markets. I do not think that they will raise rates at this meeting, but will instead do so in December. Regardless of whether the fed raises rates or does nothing, I expect this week to be very turbulent.