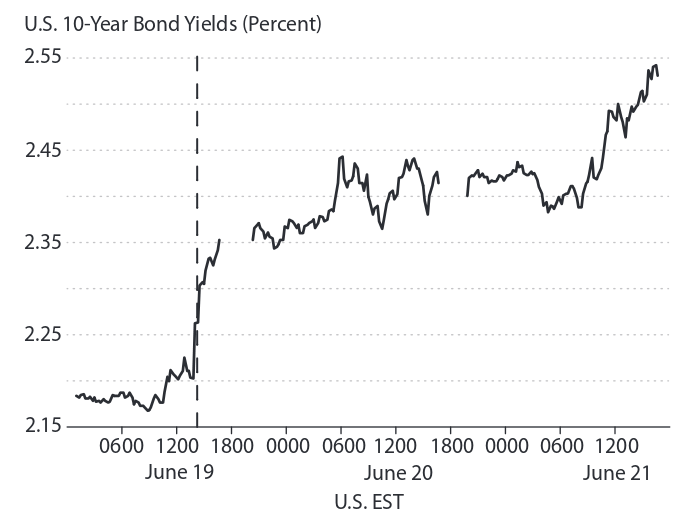 Last week the markets reacted positively following the monetary policy statement from the fed. In the statement, the fed noted that economic growth moderated somewhat and that the labor market continued to improve. They noted that declines in energy prices boosted household spending while housing remained slow and exports weakened. None of these statements were much of a surprise as they have all been pretty apparent in recent data. Prior to the announcement the financial media was focused on the keyword “patient”, more specifically they were looking for the following sentence that was present in previous statements, “Based on its current assessment, the Committee judges that it can be patient in beginning to normalize the stance of monetary policy.” As bloggers and journalists desperately ctrl-f'd “patient” they were greeted with the 0 matches. The new guidance was as follows:

The Committee anticipates that it will be appropriate to raise the target range for the federal funds rate when it has seen further improvement in the labor market and is reasonably confident that inflation will move back to its 2 percent objective over the medium term. This change in the forward guidance does not indicate that the Committee has decided on the timing of the initial increase in the target range.


The last quote made it pretty clear that the fed still does not know when they are going to raise rates. They are waiting for an uptick in inflation over the medium term. In fact, Janet Yellen also reiterated this point a few times during her testimony. My view is that this change in forward guidance represents a shift in the fed's forward guidance policy going forward. I suspect that the influence of the Fed's new Vice Chairman Stanley Fischer is responsible for this change.

Janet Yellen has long argued for a policy of openness and transparency regarding monetary policy decisions at the federal reserve. In this speech from 2012, she discusses the importance of clearly articulating fed policy.

A growing body of research and experience demonstrates that clear communication is itself a vital tool for increasing the efficacy and reliability of monetary policy. In fact, the challenges facing our economy in the wake of the financial crisis have made clear communication more important than ever before.


Under Ben Bernanke and Janet Yellen the Fed embraced this new policy of clear communication. This policy was also adopted by Stanley Fischer when he was head of the Bank of Israel, but since then he has changed his opinion and even spoken against giving forward guidance. In a speech from 2013, Fischer said, “You can’t expect the Fed to spell out what it’s going to do. Why? Because it doesn’t know. We don’t know what we’ll be doing a year from now. It’s a mistake to try and get too precise.”

I suspect that the “taper tantrum” as it is now known has raised concerns from certain fed members about giving too much forward guidance. The taper tantrum occurred when Ben Bernanke indicated that the fed may begin tapering it's asset purchases. This led to an intense selloff in U.S. treasuries and a deterioration in risk assets as you can see from the chart on the right. In later speeches Bernanke lamented this reaction and couldn't understand why the market reacted the way it did. Later in the September 2014 minutes Fed members showed concern for the unintended consequences of being too open about future monetary policy decisions, “A number of participants also noted that changes to the forward guidance might be misinterpreted as a signal of a fundamental shift in the stance of policy that could result in an unintended tightening of financial conditions.”
Stanley Fischer is an influential and well-respected senior economist. He was PHD thesis advisor for Ben Bernanke (former Fed chair before Janet Yellen) and European Central Bank chair Mario Draghi. Although Fischer is not the Fed chair, his influence will carry significant sway at the fed. I suspect that Fischer has been able to convince members of the Fed who fear another taper tantrum to remove words like “patient” from the fed statement, not because the fed has decided on a change, but rather because the fed expects that it could be making a change soon. While I can see why the fed may be concerned about sending the wrong messages, I fall more into the Yellen camp and see this as a step backwards in fed transparency.