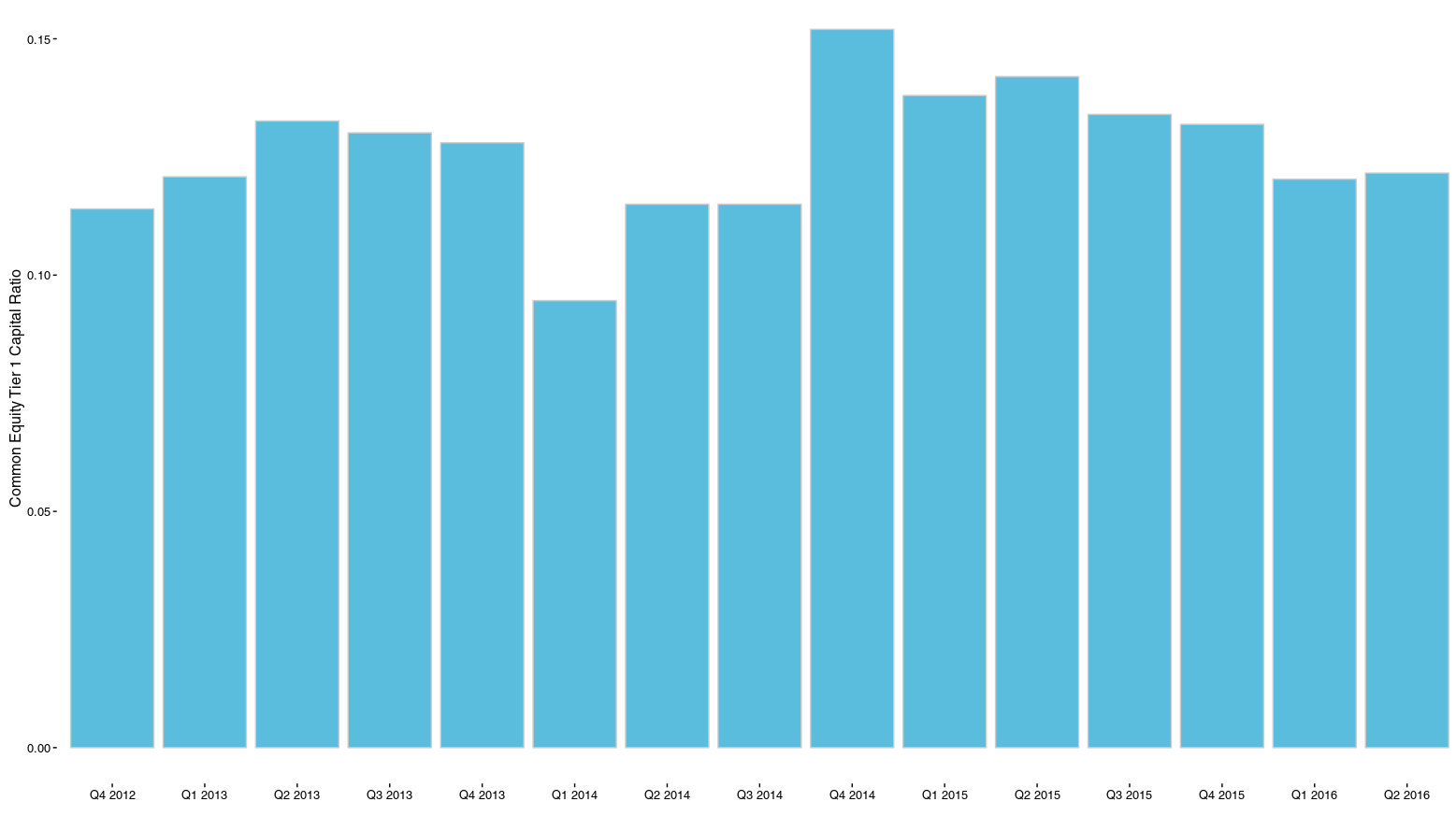 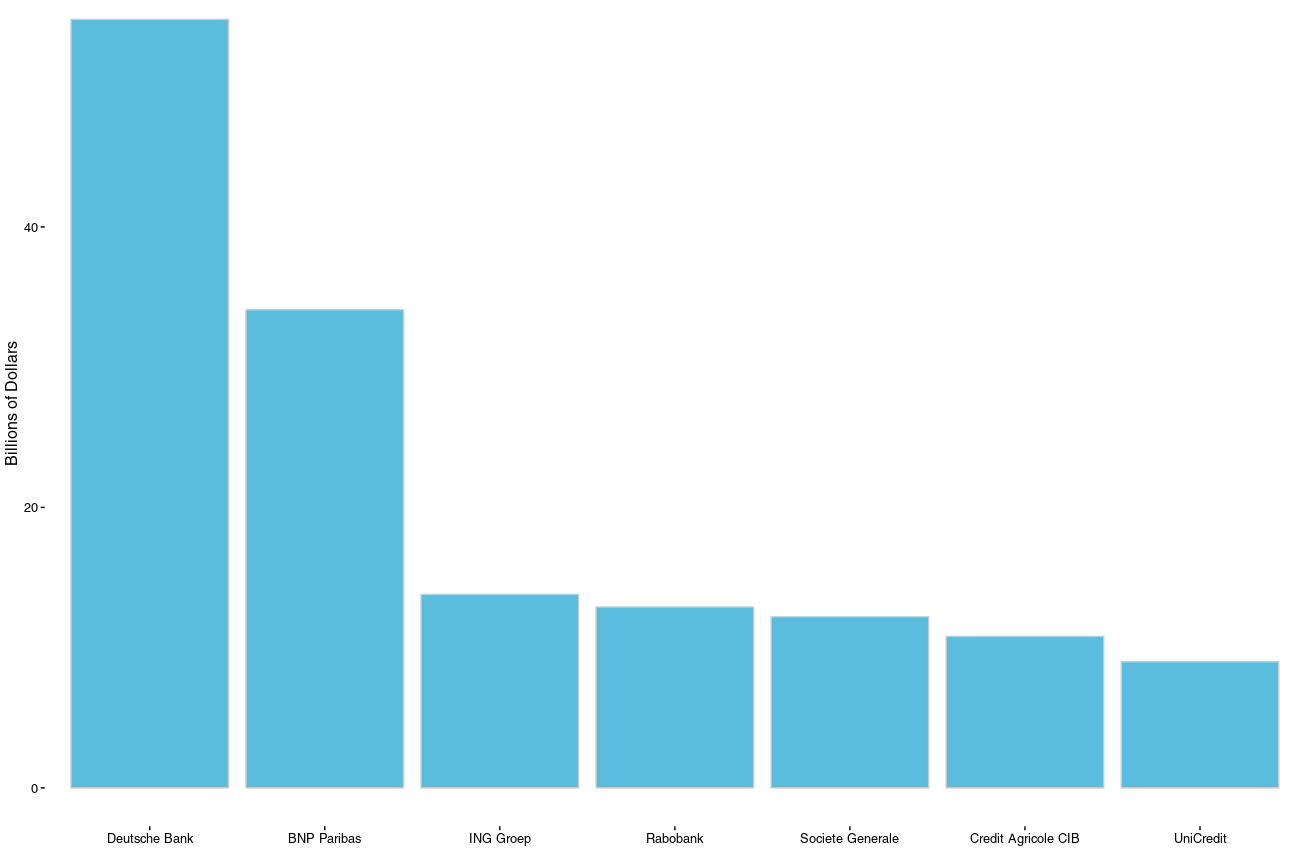 Since writing about Deutsche Bank last week its stock has been on a wild ride. Shares of Deutsche Bank fell after it was reported that many large funds had pulled their prime brokerage business from Deutsche Bank. However, the stock price recovered and closed higher for the after Agence France Press reported that a settlement had been reached with the department of Justice to reduce Deutsche Bank’s fine to $5.4 billion from $14 billion. This number seemed plausible if you’ll recall the previous post where I mentioned that Goldman had a similar fine cut by two-thirds. However, it appeared that they were using anonymous Twitter handles as their source and over the weekend it was reported that Deutsche Bank had not even begun negotiations. The German market is closed today, but will reopen tomorrow and based on U.S. trading it appears that Deutsche Bank’s shares will open lower on Tuesday. This week we will continue to look at some of the issues facing Deutsche Bank.

Deutsche Bank has the ability to tap the stock market to raise additional capital by issuing new shares. However, they most likely want to wait until after they settle with the U.S. Department of Justice because if they have less capital they may be able to negotiate a lower settlement. Deutsche Bank had about €5.5 billion set aside for legal provisions, so they are most likely expecting a settlement within that limit. Additionally, the DOJ may not want to risk contagion by imposing a fine that would require them to try to raise capital from a position of weakness. The lower Deutsche Bank’s stock price, the more shares they will need to issue to raise the same amount of capital. A direct capital raise isn’t the only way that Deutsche Bank’s stock might get diluted though.

After the financial crisis in 2008, new banking regulations required banks to have higher capital ratios. In order to meet these higher requirements, Deutsche Bank (and other European banks) issued a new financial product called contingent convertible bonds often shortened to just CoCo. CoCos have attributes of both bonds and equities for several reasons. They are like bonds in the sense that they pay a coupon to the holder of the bond, but they can become equity if they are triggered. In Deutsche Bank’s case they become equity when capital levels fall below a certain threshold (5.125% in most cases). This is beneficial to regulators because it acts like a bailout, it will also dilute shareholders and hurt Deutsche Bank’s stock price. CoCos are also unique because Deutsche Bank doesn’t have to make a coupon payment if they don’t want to.

For a long time CoCos traded close to par, but after investors started to worry about Deutsche Bank’s capital ratios, the price of CoCos started to drift lower and now trade at a significant discount. In the near term the concern is that Deutsche Bank will miss a coupon payment. In the longer term the concern is that a missed payment will fall below the trigger and CoCo bondholders who may have thought they were buying safe bonds end up with much less valuable Deutsche Bank shares. Figure 1 shows that their CET1 ratio has been trending lower for the last several quarters.

In my opinion the biggest issue for Deutsche Bank is to deliver a few solid quarters. This may seem unlikely given the regulatory headwinds as well as the lost business from concerned customers, but there is one bright spot that may have been overlooked amidst the chaos. Deutsche Bank has been making a lot of dollar-denominated loans in 2016 as you can see in figure 2. A new SEC regulation set to take effect October 14th has driven up three month $ Libor to 0.85% from around 0.60% for most of the year which makes lending in U.S. dollars more profitable. Meanwhile, thanks to negative interest rates in Europe, Euribor has fallen to -0.30% (yes, that’s a negative sign). This means that Deutsche Bank can get paid more to borrow in Europe and get paid to more to lend in the United States. If the two currencies remain stable against one another this could become a very profitable endeavor for Deutsche Bank.

Deutsche Bank has many risks and is not out of the woods by any stretch of the imagination, however unusual circumstances could help save Deutsche Bank. I think most of the concerns are completely warranted and yet there is a huge potential opportunity to profit should those concerns fail to materialize. I am very skeptical of the long term viability of Deutsche Bank, but I will be surprised if a a regulatory fine is what finally does them in.