The higher the number the weaker the ruble.
× 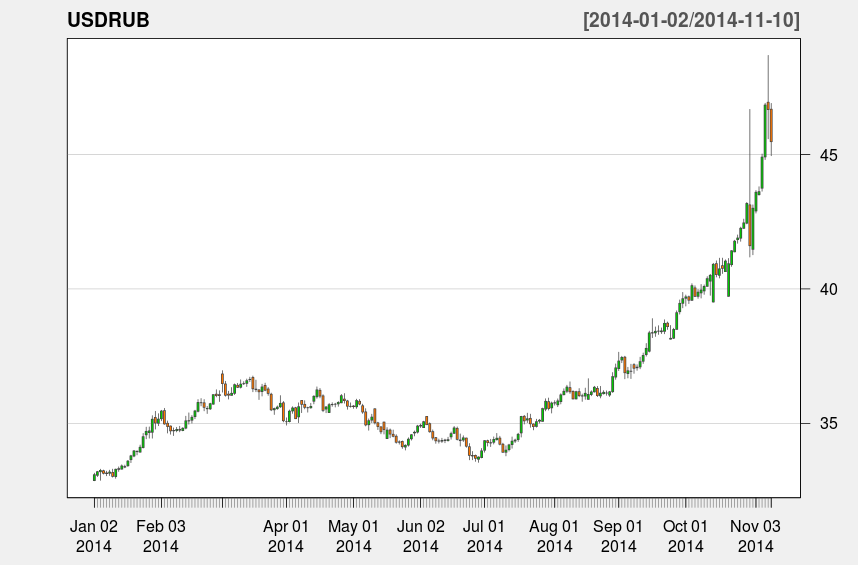 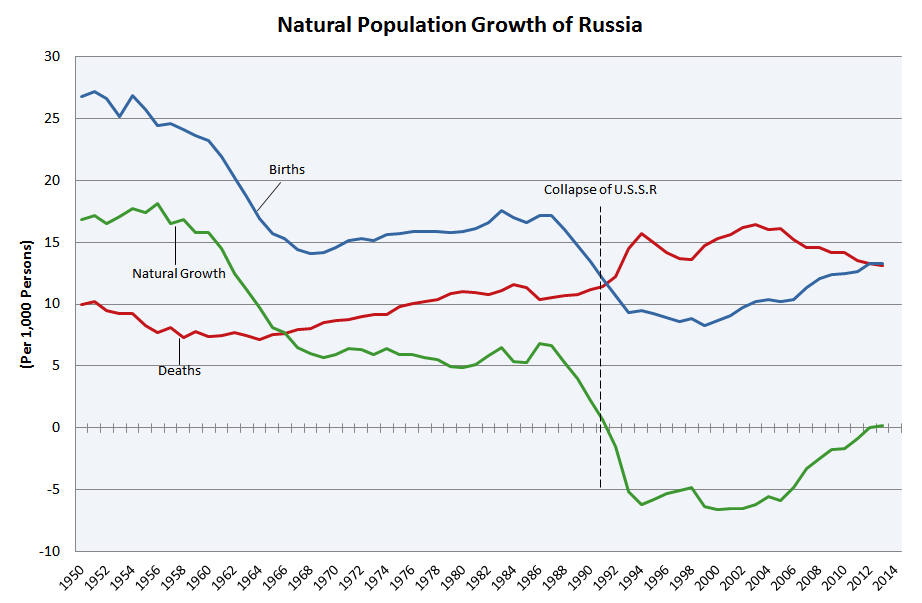 This chart shows the percentage of the Russian population by age as of 2009.
× 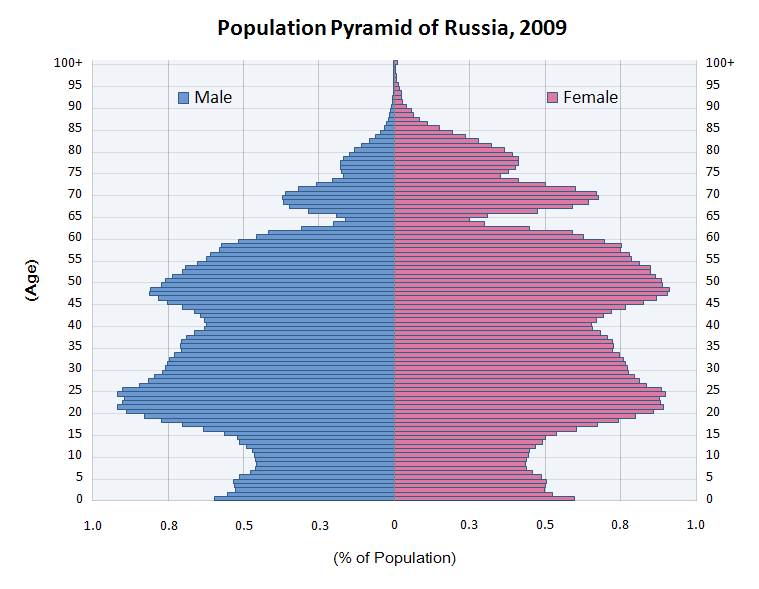 Last week the markets closed higher and the S&P 500 continued to make new highs. The dollar strengthened against most other currencies. The euro continued its downward trajectory now only 1.24 relative to the dollar, a pretty steep decline considering it was nearly 1.40 just a few months ago. The Japanese yen has also been falling sharply against the dollar as the Bank of Japan (BOJ) announced additional asset purchases. Possibly the most impressive of all the currency devaluations is that of the Russian ruble which is the topic of today's newsletter.

The Russian ruble has lost about 40% of its value relative to the dollar so far this year. That is a staggering loss for a currency. The chart on the right shows the US dollar relative to the ruble; the chart is starting to look like an exponential function. This is a very bad sign for a currency, because these kind of charts tend to precede hyperinflation or default. The Russian central bank has been aggressively fighting to protect their currency with increasingly desperate measures. Capital is fleeing Russia for a variety of reasons, this week I'll touch on a few of those.

In late 2013 and early 2014 protests were beginning to escalate in Kiev, the capital city of Ukraine. These protests eventually turned into a revolution and were successful in overthrowing the democratically elected but corrupt Viktor Yanukovych. Yanukovych was closely aligned with Russia and had the support of many eastern Ukrainians, but not western Ukrainians who wanted a closer connection with the EU instead of Russia. After the country was overthrown, many eastern Ukrainians began holding referendums to leave Ukraine. Crimea voted to leave Ukraine and become part of Russia and Putin was happy to oblige (Russian troops were already in Crimea before the vote occured). The United States government was not pleased with this development which led to sanctions.

Beginning on March 6, 2014, President Obama began signing executive orders that placed increasingly harsh sanctions on Russia. The European Union began placing sanctions on Russia as well later that March. The sanctions began freezing the assets of influential Russian businessmen held outside of Russia and banning visas of some individuals. Sanctions expanded into agriculture, banking and energy industries. US and European corporations began canceling and postponing projects in Russia. These sanctions have made Russia, once a former growth play, unpalatable for foreign investment.

The recent collapse in the price of oil has also had a huge impact on Russia. As of 2012, the oil and gas sector accounted for 16% of GDP, 52% of federal budget revenue, and 70% of exports. The chart on the right shows the decline of ruble futures alongside oil futures, it seems likely that the two are connected. Some have suggested that the U.S. by way of Saudi Arabia is holding production levels higher to put additional pressure on Russia. While there may be some truth to that, I think there are much larger issues driving the price of oil which I have discussed recently here.

Russia also has one of the most pressing demographic challenges in the world. The population of Russia peaked in 1991 before declining into the mid-2000s and then reversing the trend again. However, this trend is expected to swing back to a declining population again in the coming years. The Population pyramid chart on the right shows the coming problem pretty clearly. There aren't enough young people to replace and support the older generations. Demographic issues like this can create serious strains on a country's budget even countries with a strong diversified economy.

Russia has a history of defaulting on their loans and currency collapses. The most recent collapse of the ruble was in 1998 which led to a collapse of the U.S. mega hedge fund Long Term Capital Management made up of several Nobel prize winning economists. The recent volatility in the ruble has become very extreme moving in a 6% range up and down last Friday. If you are foreign company trying to do business in Russia, it becomes very difficult to plan for wild fluctuations like that. If this continues it could also lead to civil unrest in Russia as prices for day-to-day goods rise. The Russian Central bank has raised interest rates and has aggressively sold its reserves to prevent the ruble's slide but to no avail. Some traders might think the ruble is oversold and due for a bounce, but one should exercise extreme caution as currency problems typically don't resolve themselves quickly or neatly, especially in Russia.

The higher the number the weaker the ruble.

This chart shows the percentage of the Russian population by age as of 2009.