This shows the value of the US dollar index since its inception.
× 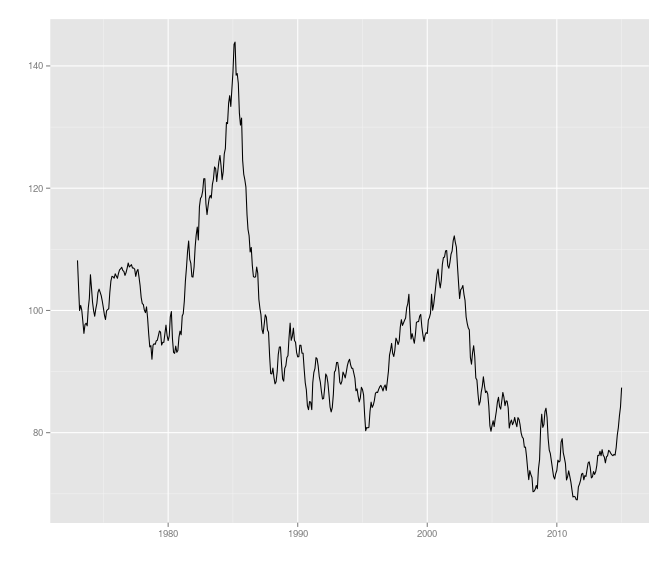 In the previous newsletter I wrote about the recent flurry of activity from central bankers around the world. Central bankers, worried about persistently low inflation, have been cutting rates and announcing plans for quantitative easing, which has led to big swings in currencies. This week I want to discuss why currency movements matter and how they affect investments.

Developing a better understanding of currencies starts with the concept of relativity. There is no such thing as the value of a dollar. The dollar does not exist in a vacuum and must always be measured to something else. You may have heard financial reporters say, “The dollar has been increasing in value.” However, the phrase really doesn't mean a lot unless you're comparing it to something. Are they comparing it to Canadian dollars? Swiss Francs? Japanese Yen? Usually when you hear financial professionals say the dollar is rising, they are referring to the dollar index. The dollar index is a weighted geometric mean of a small basket of currencies. The current weights are: euro 57.6%, Japanese yen 13.6%, pound sterling 11.9%, Canadian dollar 9.1%, Swedish krona 4.2%, Swiss franc 3.6%. Personally I find the dollar index to be one of the most worthless indices that is widely followed. The makeup of the basket doesn't make any sense to me; why the Swedish krona over the Mexican peso, a much larger more relevant trading partner?

When comparing currencies you always need to have a numerator and a denominator. When you say the euro is 1.13 dollars, you are putting euros in the numerator and dollars in the denominator this is usually written as EUR/USD, EURUSD, or EUR.USD these are also referred to as crosses or pairs. You could also say the dollar is 0.89 euros, however the convention is to write it with the euro as the numerator. You could apply this same methodology to anything that can be exchanged for a dollar. For example, an apple for sale at the grocery store for $1.15 would be 1.15 USD/apple or you could say .87 apple/USD or 118.93 USD/AAPL(Apple stock) or 0.0084 AAPL/USD .

Another important concept when thinking about currencies is to understand that a dollar can take many forms. Let's say you pick up a 20 dollar bill on the street and then you take it to your bank and deposit into your account. The teller gives you a receipt showing that you have another 20 dollars in your bank account, but it isn't exactly the same thing. A better way to think about it is that you made a $20 loan to the bank and they gave you the receipt as an IOU. The bank agrees to take your money make loans to others, invest it, or do whatever else it wants with it and in return they tell you that you can have it back whenever you want. If you put it in a savings account it is even slightly more valuable than the $20 dollar bill, because the bank is giving you interest; you may also feel more comfortable knowing that your dollar can't easily be stolen.

To really drive home this concept let's look at another example. This time instead of finding a $20 bill on the ground you find a lottery ticket and as luck would have it, it's the winning ticket and now you show up. The exchange rate on that lottery ticket is 500,000,000 USD/WLT (winning lottery ticket), after careful deliberation you decide that the lottery ticket is overvalued and you want to exchange it for dollars. Then they present you with a giant check that says $500,000,000 and a smaller much more valuable one that you take to your bank teller. The check itself isn't the same as $500,000,000 cash it is actually a promise from the lottery ticket company. Once you deposit it in your bank account you get another receipt that says your balance is $500,000,020, but is it really? The FDIC says that your bank account is insured up to $250,000 and that is guaranteed by the full faith and credit of the United States. So a more accurate receipt would read: “You have 250,000 dollars and an IOU to pay you $499,750,020 from your bank.

A little while later your luck runs out. You find out that your bank made a series of really bad investments and they have failed. After a few months pass you get a check in the mail from FDIC for $250,000, not the $500,000,020 that you were expecting. This example isn't the only way the dollar can take many forms.

I like to think of dollars as an IOU from the federal government that is due immediately. On a dollar bill it says, “this note is legal tender for all debts, public and private.” Treasury bonds are guaranteed by the U.S. government’s “full faith and credit” and are backed by its authority to tax U.S. citizens. A treasury bond is basically the same thing as a dollar, but with a different duration. The value of that bond will fluctuate in value based on what the market thinks the payments from a US government bond will be worth over the entire lifetime of that bond. I won't go into much more detail on this concept, which could take up an entire newsletter (let me know in the comments section if you'd like to see that in a future newsletter). Here is the basic idea, a dollar can take the form of a dollar bill due immediately, a treasury bill due in 3 months or any other duration for that matter (5, 10, 30 years). Think of the dollar bill like a checking account with the bank of Uncle Sam and a bond as a CD.

Now that you are in the right mindset let's discuss currency risk. Currency risk exists whenever you transact in more than one currency. For example, let's say you run an Italian restaurant in the United States. Your customers pay you in U.S. dollars, you pay your employees in U.S. dollars and you get most of your ingredients directly from local farmer's who you pay in U.S. dollars. So far, no currency risk. However, the secret ingredient in many of your recipes is olive oil from a small farm in Italy. You have an arrangement to buy 50 barrels of olive oil per year for €10,000. When you first made the deal, USD/EUR was 1.40, but now it is only 1.13. This means that instead of paying $14,000 you're now only paying $11,300—not bad. In this case the change in currency worked to your advantage, but now it is time to renew your contract and the farmer in Italy now changes the contract to €12,389 per 50 barrels. You agree to the new deal because that's pretty much the same as the original $14,000 per 50 that you were paying before. Over the next couple months the euro starts rising again and you notice that each order is getting more and more expensive (in dollar terms), you've just experienced the downside of currency risk.

Currency risk also applies to investors who purchase European stocks that are trading in the United States as American depository receipts (ADRs). Let's say you buy shares of SNE (the ADR for Sony Corporation). Since Sony's headquarters are in Japan you are not only making a bet on Sony as a company, you are also investing in the Japanese yen. Sony's stock on the Tokyo stock exchange could be unchanged all year, but if the Japanese yen rises 10% relative to the dollars that you paid for it, your brokerage account will show a 10% gain. Currency risk can be hedged. Let's say you think Sony stock is going to do well, but you think the yen will lose value relative to the U.S. dollar, you could go long USDJPY to offset the currency risk. However, you are always making some sort of bet when you are conducting business in more than one currency.

Certain countries and corporations have started issuing debt with negative rates, that is, if you want to lend money to that country or corporation you have to pay for that privilege. If this seems unusual to you, that's because it is. This has even started at some bank accounts. This can only happen because savers and investors do not treat all euros, dollars, or francs equally. Savers place a higher value on francs in a Swiss bank account than francs stuffed underneath a Swiss mattress. Someone could come and steal the money, you don't have the convenience of accessing that money from an ATM, etc. Additionally, a bond with a negative interest rate can still appreciate in value if interest rates go even more negative. Also, if the value of the Swiss Franc is expected to rise relative to most other currencies, investors will attempt to price that into the value of those bonds. For example, if you are a US investor buying a bond with a negative rate and you hold it until maturity, you could still make money if USDCHF (CHF is the symbol for Swiss francs) decreases in value more than you have to pay to the bond issuer. However, unless you're extremely wealthy and you absolutely must have Swiss francs, you should probably just buy swiss francs and hold them instead of the bonds. However, this is not always an option if you are a bank.

Just to be clear, I think negative rates are crazy and they probably can't last for an extended period of time. Economists used to think that it was impossible, but that theory has clearly been debunked. Thinking about currencies and negative rates can get complicated and it involves thinking about things in a more global way, but it can also help you plan a cheaper vacation.

This shows the value of the US dollar index since its inception.