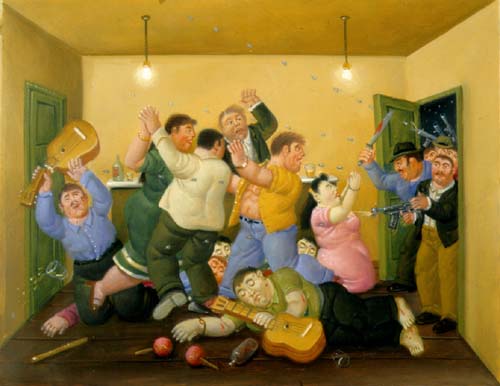 This week we will finish up our 3 part series on Colombia by taking a look at the government’s recent victories over rebel extremist groups. Just last week, a permanent cease-fire went into effect between the rebel group FARC (Revolutionary Armed Forces of Colombia) and the Colombian government. After 52 years this brings an end to one of the longest armed conflicts in human history.

FARC was formed after a period in Colombia known as La Violencia when the assassination of Liberal Party presidential candidate Jorge Eliécer Gaitán triggered a 10 year conflict between the Liberal and Conservative Parties of Colombia. La Violencia resulted in more than 200,000 deaths including riots in Bogota that left 5,000 people dead in just 10 hours. Figure 1 shows a painting by a Colombian artist Fernando Botero depicting La Violencia. Manuel Marulanda Vélez and his family fought on the side of the Liberal party during La Violencia, but he and a column of guerrillas eventually switched ideologies to the Communist party.

La Violencia ended in a power-sharing agreement between the Liberal and Conservative parties where they would hold elections but alternate power between the parties regardless of the results. In the early 1960s, in a plan known as Accelerated Economic Development the government began subsidizing large-scale industrial farming while forcing peasants practicing subsistence farming off their land. Communists organized self-defense communities to fight off the Colombian government. The United States pushed the Colombian government to attack these self-defense forces and this eventually led Manuel Marulanda Vélez to retreat to the mountains and form the FARC guerrilla movement.

In the 1980s FARC began taxing cocaine traffickers and helped protect their infrastructure. This influx of money helped FARC expand and it began attacking Colombian government troops directly. FARC also expanded into kidnapping and extortion to generate income and were designated as a terrorist organization by most western governments. Peace talks began in the late 1990s, but were eventually scuttled after FARC hijacked a plane in 2002. 2002 was the peak of FARC’s power; it had an army of 20,000 and controlled nearly 1/3rd of the country. At this time many thought Colombia’s government would fail and the country would devolve into a state controlled by paramilitaries and drug traffickers.

The presidency of Álvaro Uribe was a major turning point in the conflict. Uribe expanded the military and began an aggressive campaign against FARC. Uribe’s defense minister and Colombia’s current president Juan Manuel Santos expanded the military and brought in advisors from United States special forces. Colombia now has the second largest fleet of Blackhawk helicopters in the world behind only the United States. Uribe and Santos won numerous victories and FARC’s power began to dwindle.

In 2008, Colombian government forces attacked a FARC camp in Ecuador killing a member of FARC’s secretariat (Central high command) Raúl Reyes. The following week another member of the 7-man secretariat was killed by his bodyguard. A few weeks later Manuel Marulanda Vélez, founding member and the main leader of FARC died of a heart attack. By 2010, FARC had dwindled to just 8,000 members and Uribe’s former defense minister Juan Manuel Santos was elected president.
Santos

Many expected a hard-line stance from Santos against FARC because of his success as defense minister, however he surprised many by resuming peace talks. This was a risky political move for Santos because 95% of Colombians have a negative view of FARC. Santos has offered leniency to FARC rebels who lay down their arms and has established programs to help reintegrate them into Colombian society. This leniency for terrorists may strike some as an injustice, but many of the FARC rebels were forced in and have been fighting since they were children. Unlike other peace negotiations in the past this seems more like a surrender than a peace treaty because FARC commanders are voluntarily submitting to the Colombian judicial system. The cease-fire will not be finalized until the public votes in a referendum with the success of the referendum depending mostly on a continuation of FARC non-violence in the mean-time.

One of the remarkable things about Colombia is how fast it is transitioning into a modern prosperous state when it was plagued with violence and corruption so recently. They have made smart investments in infrastructure, maintained a relatively balanced budget despite the oil price shock and have been able to restore order. I believe that Colombia has a bright future economically. I also personally found Colombia to be an unbelievably beautiful country and would recommend it as a safe and affordable tourist destination.