This Chart shows the performance of the CSI 300 index.
× 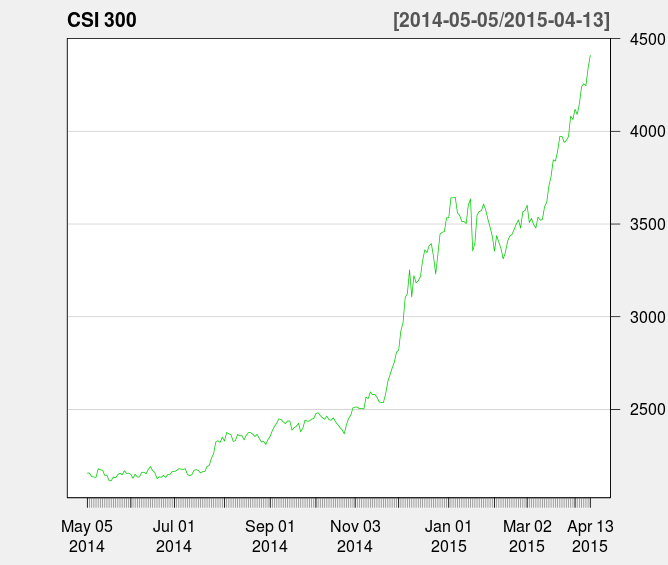 This shows the education level of new investors in China. Source: Bloomberg
× 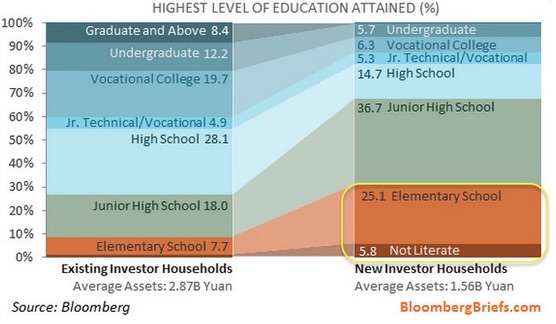 Over the last several months Chinese stocks have moved steadily higher at an impressive pace. The CSI 300 index, which tracks the performance of 300 stocks on the Shanghai and Shenzen stock exchanges is show in figure 1. At the beginning of this year I wrote some predictions (guesses) for 2015, where I predicted that, “Chinese stocks will form a bubble, but will also reverse suddenly and spectacularly.” So far it certainly appears that Chinese stocks have formed a bubble. The strength of Chinese stocks has not been reflected in the fundamentals, in fact growth has slowed dramatically as the Chinese government has enacted reforms to crackdown on corruption and rebalance its economy. In this post I want to discuss why I think this is a bubble, how it happened, and what it means for China and the rest of the world.

There are no hard rules for determining bubbles and even after a bubble has burst it can still be difficult to identify the exact reasons why it was a bubble. Most bubble characteristics are anecdotal, subjective and/or qualitative so don't expect a definitive conclusion. Let's first look at valuations, the Shanghai composite trades at about 15x forward earnings, slightly below that of the S&P 500 at about 17x (which is at its highest level since 2004). However, the valuation of the median company on the Shanghai and Shenzen exchanges are 30x and 39x respectively, compared to about 18x on the S&P 500. Average price-to-earnings ratios are much lower because Chinese indices are heavily weighted to financials. A heavy weighting to financials is also a cause for concern because it usually indicates malinvestment. Financials as a percentage of the S&P 500 reached their peak just before the housing bubble collapsed in 2007. Investors are much more smitten with technology stocks, according to Bloomberg:

The industry is leading gains in China’s $6.9 trillion stock market, sending valuations to an average 220 times reported profits, the most expensive level among global peers. When the Nasdaq Composite Index peaked in March 2000, technology companies in the U.S. had a mean price-to-earnings ratio of 156.

Retail Investors, Borrowed Money and Scammers
The Shanghai-Hong Kong stock connect went into effect in November 2014. This program allows eligible investors in China to buy stocks listed on the Hong Kong Stock Exchange via their local brokers, and allows Hong Kong and international investors to purchase eligible Shanghai-listed shares through their local broker. As you can see from figure 1 that is exactly when Chinese shares began taking off.

On weekends in China, stock promoters gather in downtown Shanghai and pitch stock tips and investment strategies. However, many of these individuals are attempting to sucker in uninformed retail investors. They stand to benefit through simple pump-and-dump schemes where they create fake buzz in a stock, buying and selling shares in a series of trades to simulate activity; at the same time they are promoting these stocks on street corners to draw in new investors. Once new investors start to dry up, the promoters sell their shares and leave the suckered-in retail investors holding worthless shares. This piece by Frank Langfitt provides a good look at these promoters.

In just march, Chinese investors opened a record 4 million new accounts. This is concerning for several reasons, but most importantly because according to data from Bloomberg two-thirds of those new accounts were opened by people who have never attended, much less graduated from High School. Figure 2 shows the education breakdown of new Chinese investors versus older investors. Retail investors can drive stocks higher at a rapid pace, but they are also much more inclined to panic selling which is why this bubble is likely to unwind quickly when it turns. Brokers have also extended a record amount of margin which has allowed Chinese investors to amplify their gains with borrowed money, this too will exacerbate losses on the way down as brokers force clients to liquidate securities in order to meet margin requirements.

In the past, Chinese wealth has been highly concentrated in real estate. Nearly two-thirds of China's family assets were in housing in 2013. As of February, Chinese housing prices have fallen 5.7% this year alone and have fallen in 66 of 70 major cities. Financial institutions have been selling investment products that rely on the value of households, a rapid decline in these prices will require the Chinese government to bail out many of these institutions.

It is interesting that this bubble is happening now, because nearly all indicators of economic growth have been deteriorating rapidly in China. Industrial production, housing starts, copper prices, iron ore prices, freight traffic, you name it. In fact, China's largest companies were the most pessimistic they have been since the height of the global financial crisis according to the latest MNI China business sentiment survey in February.

Although China's stock market bubble may seem painfully obvious, it would be unwise to think that it will go away right away. Bubbles are notoriously unpredictable and can go a lot higher than you think. Many investors who bet against the tech bubble in 2000 were correct in their predictions but lost money because they misunderstood the timing. The much more interesting aspect to me is what happens to the global economy after this bubble bursts.

This Chart shows the performance of the CSI 300 index.

This shows the education level of new investors in China. Source: Bloomberg