Source: Board of Governors of the Federal Reserve System
× 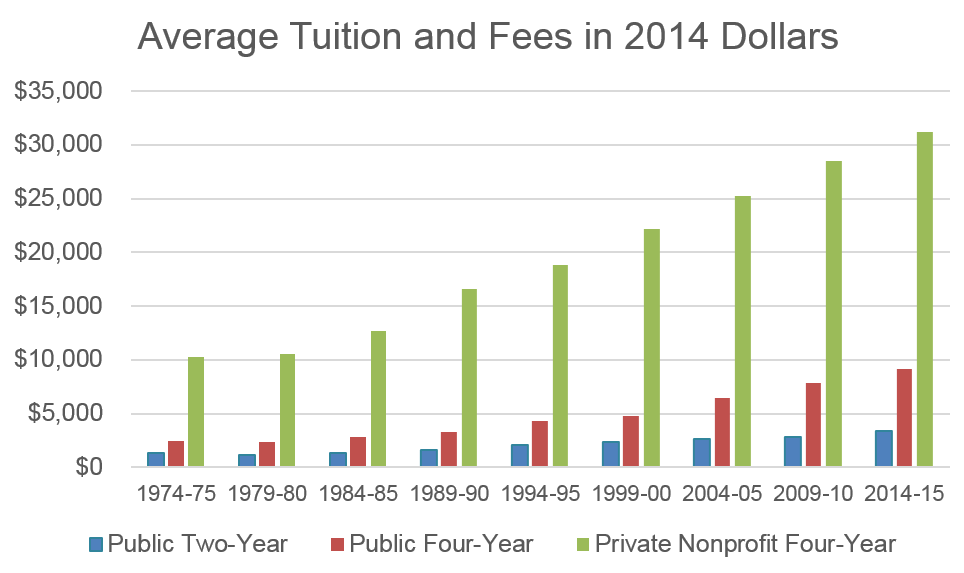 A Short History of Student Loans

This week I want to discuss a burden that is weighing on the U.S. economy. About 40 million Americans carry this burden and in many cases it prevents them from buying a home, qualifying for loans, or taking the job they want. The number of Americans with student loans has been growing steadily along with the total debt outstanding. Figure 1 shows that the steady growth of student loans since 2006 has surpassed a trillion dollars.
The growth in student loans is intertwined with the growth in tuitions. The cost of college education is growing much faster than the average rate of inflation in the United States. Figure 2 shows the increasing cost of tuition; also note that this chart has been adjusted to 2014 dollars. I will discuss this situation in more detail in the coming weeks, but this week I am going to provide some historical context on student loans and how they have evolved over the years.
History
The United States began offering government backed student loans in 1958 with the passage of the National Defense Education Act (NDEA). The loans were only offered to students majoring in science, engineering or education. The NDEA was part of Eisenhower’s push to make the United States more competitive with the Soviet Union after the launch of Sputnik. The fear was that U.S. scientists were falling behind their Soviet counterparts in science and engineering. This program lasted until it was significantly modified with the Higher Education Act (HEA) in 1965 during the Great Society reforms of Lyndon Johnson.
The HEA greatly expanded the number of loans and made it easier for lower income students to obtain loans. It also changed the way that loans were funded. Instead of issuing the loans directly, the government insured loans made by private lenders. This was the preferred approach at the time because it moved the cost off the government’s books. This was a great deal for lenders because the loans were virtually risk-free. They would collect the profits and the government would shoulder the risks.
In 1972, during the Nixon administration, Sallie Mae was created as a Government Sponsored Enterprise (GSE) similar to Fannie Mae and Freddie Mac. Sallie Mae would originate and acquire student loans and by 1979 total assets (loans owned) exceeded $1 billion. In the 1980s, Sallie Mae was listed on the New York Stock exchange under the ticker SLM. During the Clinton administration there was a push to move back to the old system due to complexity. A compromise was reached where the government began issuing direct loans and continued to insure private loans. The Clinton administration also pushed for the privatization of Sallie Mae and by 2004 it became a fully private corporation. In 2008, Sallie Mae was selected to service loans originated by the department of education, this means that they collect payments and handle the clerical aspects for a fee, but bear none of the risk and are not entitled to interest.
In 2010, The Health Care and Education Reconciliation Act of 2010 eliminated federally insured student loans going forward and now all federal loans are issued directly by the department of education. Figure 3 shows the interest rates charged on student loans issued after 2014. These loans are all now tied to the government’s borrowing cost, specifically the 10 year treasury yield.
More students than ever are feeling the pressures of student loans and none of the recent changes have done much to address the problem. However, lawmakers on both sides of the aisle are beginning to realize that this is a serious problem. Imagine trying to buy a house or start a family when both partners have $20,000+ in student loan debt. Next week we will look at some the struggles facing students as well as some of the proposed solutions.

Source: Board of Governors of the Federal Reserve System